Sprint queen Hima Das on Tuesday praised a woman traffic constable for managing traffic despite heavy rain on a busy road in Nagaon district of Assam.

After a few photos of the woman traffic constable performing her duty in the rains surfaced on social media, the Dhing Express appreciated her through a post on Twitter.

‘I salute the dedication of women traffic police personnel who is managing traffic despite heavy rain in my hometown Nagaon district #womenempowerment’. 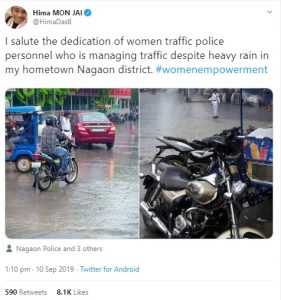 The woman traffic constable has been identified as Ranjula Devi.

She was seen to be performing her duty wholeheartedly in rough weather conditions by standing on a side of the road without any kind of shelter.

It may be mentioned that another police constable of the state Mithun Das received huge appreciation after a video of him managing traffic in rough weather condition standing in an uncovered podium at Basistha Chariali in Guwahati went viral on social media.

Das was not only showered with praise in social media for devotion towards his duty but also made headlines in both local and national media.

Moreover, he was also felicitated by the police commissioner of Guwahati Deepak Kumar at a function for being a source of inspiration with his full commitment towards his duty.