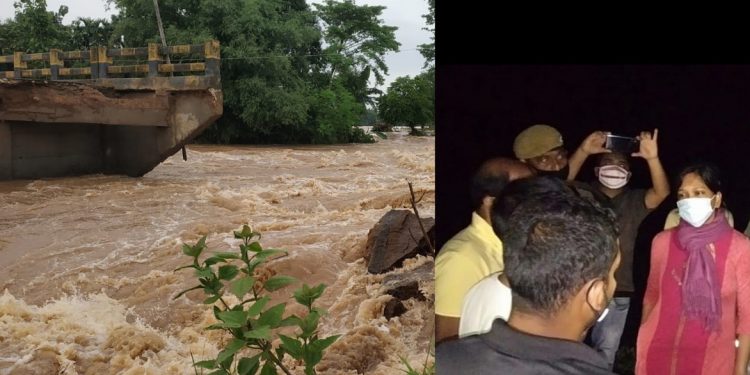 The border areas in Goalpara district of Lower Assam had to suffer yet another major flash flood created due to the heavy shower in neighbouring Garo Hills of Meghalaya on Sunday.

The forceful midnight deluge coming down through river Krishnai washed away a major portion of the Krishnai-Nepalikhuti PWD Road at Kharija Manikpur within no time.

Hundreds of people made hue and cry as the area was affected by flash floods and their houses were inundated by waters.

Already kept on alert, the services for SDRF and NDRF were called immediately.

The efforts of NDRF and SDRF deserve appreciation as they worked in extremely difficult conditions under heavy rains and heavy current to rescue 56 persons in Kharija Manikpur area on the intervening night.

Meanwhile, on receipt of information that some families were stranded in Kharija Manikpur area, Goalpara deputy commissioner Varnali Deka along with ADC and concerned circle officers and others immediately arrived at the spot.

The district administration team under the leadership of Varnali Deka stayed and monitored the rescue operation up to 3 am.

The rescued persons have been given shelter in relief camps by the district administration.

The Goalpara district committee of AAMSU staged protest on Monday at the breached part of the Moinamoti embankment of Krishnai demanding immediate repair of the area thereby giving protection to the thousands of people.

This season’s flood has affected about 4.5 lakh people in Goalapra district.

The numbers of people who are still in the 90 relief camps are 19.5 thousand.

The district administration has deployed 9 teams of doctors in the four revenue circles including Balijana, Rongjuli, Lakhipur and Matia.

The three major river tributaries, Dudhnoi, Krishnai and Jinari besides mighty Brahmaputra are on rising trend.