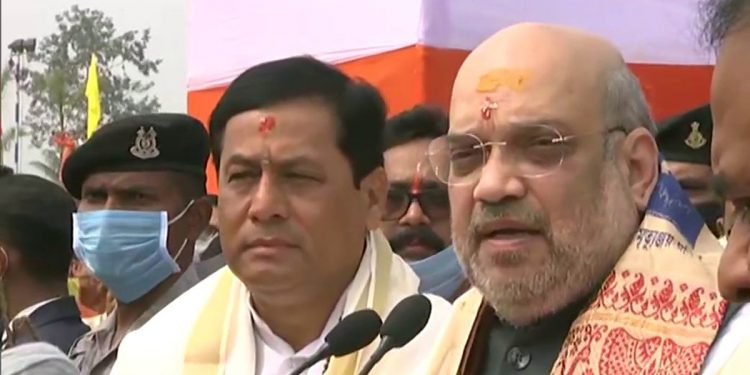 Union Home Minister Amit Shah, who is on a one-day tour of Assam has said that BJP will solve the issue of floods that wreak havoc in the State every year.

The BJP-led State Government in Assam in the last 5 years has failed miserably to address the issues of flood and erosion in the State.

After having failed in the past 5 years, Home Minister Amit Shah, who has now become a regular visitor to Assam ahead of the Assembly elections has now sought another 5 years from the people of Assam to solve the issue of floods in the State.

While speaking to the media after visiting the ‘Maha Mrityunjay’ Temple in Nagaon district of Assam, Amit Shah said that the BJP vows to make Assam “flood-free”.

It may be mentioned here that India has reported the maximum number of infiltrations from Bangladesh with border guarding agencies apprehending 1045 people from along the India-Bangladesh in the last two years.

This was informed by none other than his deputy, Nityanand Rai in the Lok Sabha on February 8.

Moreover, sealing the India-Bangladesh border to end the five-decade-long issue of illegal migration was one of the major promises made in the BJP’s Vision Document released before the 2016 Assembly elections in Assam.

The Vision Document had also promised to work closely with the Centre for “complete sealing of the border”.

Almost five years have elapsed since then but the promise has still remains on paper.

Having failed to fulfil the promise of making Assam an “infiltrator-free” and “flood-free” State, the Union Home Minister has sought for another 5 years for the BJP in the State to fulfil its promise.

“We have to make Assam flood-free, infiltrator-free and violence-free,” Union Home Minister Amit Shah said in Nagaon on Thursday.

Shah added: “Assam that was known for agitations, weapons and violence is now known for development, industrial investment, education & tourism. But this journey is incomplete. It’s the first stop in new era of development started under the leadership of PM Modi.”