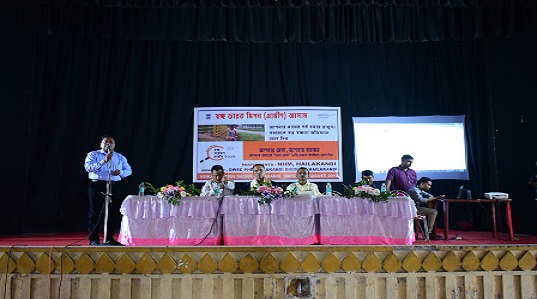 A convergence meeting on Swachh Survekshan Grameen 2018 (SSG 18) being held to achieve the goals of making Hailakandi the cleanest district of the country on August 25, 2018. Photo: Rahul Chakraborty

A convergence meeting on Swachh Survekshan Grameen 2018 (SSG 18) was held to achieve the goals of making Hailakandi the cleanest district of the country.

Officials of Public Health Engineering and National Health Mission, Hailakandi had a brainstorming session at Nazrul Sadan auditorium here on Friday with the Subdivisional Medical and Health Officers of Lala, Katlicherra, Algapur and Kalinagar Block Public Health Centers, health functionaries and other workforce to ensure cleanliness and sustain the Swachh Bharat Abhiyan goals.

Speaking on the occasion, additional deputy commissioner of health EL Fairhiem said the survekshan is really important for the cause of swachhata and is a holistic campaign that will determine the progress of sanitation and cleanliness in rural areas of Hailakandi district. He exhorted upon the line departments to work in tandem for making Hailakandi the cleanest district of the country.

Fairhiem said the people of Hailakandi are being given the big chance to get their district named as the cleanest district in the country.

Meanwhile, awareness programmes under SSG18 are being held in gaon panchayats, educational institutions and other places to create awareness on cleanliness.

States and districts across India will be ranked in the ongoing survey as per the sanitation and cleanliness status to ensure healthy competition and keep everyone motivated to embrace and sustain the Swachh Bharat Abhiyan goals.

Under the survey, a range of parameters are being applied to rank villages and districts. District level surveys of public places like schools, anganwadis, primary heath care centres, markets and panchayats are being conducted to check the status of sanitation facilities available in these places.

Citizens’ perception on swachhata is taken into account during the survey. Hailakandi, one of the 115 aspirational districts of India, has 331 villages and 62 gaon panchayats with a population of a little over 6.59 lakh as per 2011 Census.

The Ministry of Drinking Water and Sanitation will take feedback from 50 lakh citizens during the course of the survekshan. Village meetings, group discussions and surveys using an online app are being used to gather feedback from people.