Guwahati’s Radio Mirchi Radio Jockeys (RJ) have undertaken an initiative of visiting a particular location of the city everyday with a celebrity and catching traffic violaters.

The move is aimed to make the people of Guwahati realize the importance of following traffic rules and regulations. It started from Monday.

After catching traffic violators with the Guwahati Traffic Police, the RJs will cut them a Mirchi Challan in a polite manner.

The challan will contain a moral message and aims to make the violator realize the consequences of their mistake and to make them heed the traffic rules and regulations sincerely. 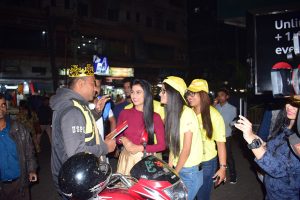 The bike rally started from Radio Mirchi office, Ganeshguri at 7 am in the morning and ended at Khanapara Veterinary Field.

The campaign is a part of an activity of Radio Mirchi 95 FM in raising social awareness about the necessity of following traffic rules and being alert on the road.