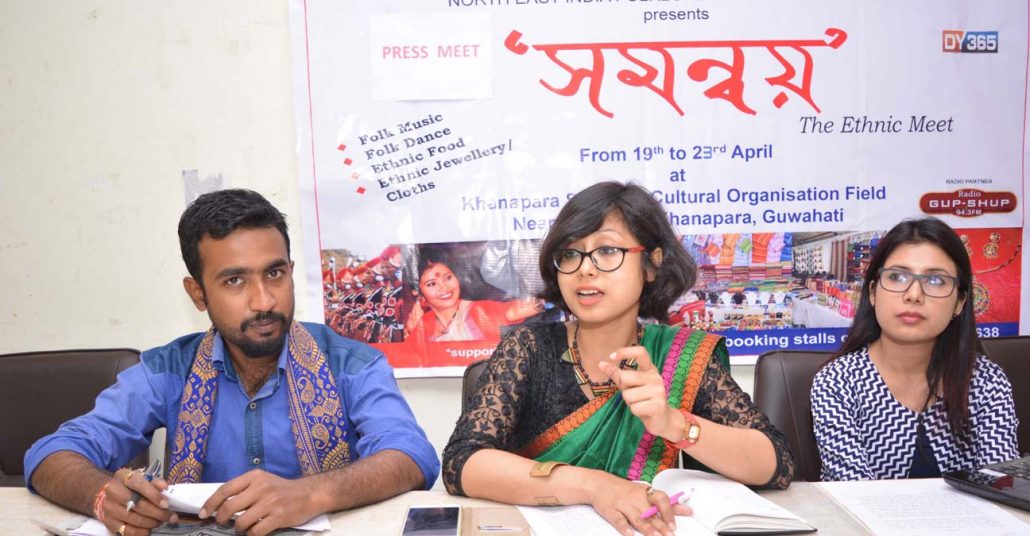 In order to promote the intangible heritage and cultural tradition of Northeast, newly-formed North East India Folklore And Cultural Vibes (NEIFACV) has planned to organize a 5-day-long event titled ‘Samannaya – the ethnic meet’ from April 19 to April 23, 2018 at the premises of Khanapara Sports and Cultural Organisation, Ganesh Mandir in Guwahati.

Informing this during a press conference at the Guwahati Press Club on Sunday, Saswati Bordoloi. President, NEIFACV, said, “NEIFACV has been formed to capture the different customs and folklore-related rituals among the public. We have a lot of aspirations and future planning. NEIFACV has been formed to create a common platform for different communities and tribes of the region.”

Bordoloi said, “We are planning to organise Samannaya – the ethnic meet where different communities and tribes from the entire region will gather together and showcase their different folk dances or folk music,” adding, “To empower and better livelihood of the communities and tribes, NEIFACV also wants to sell their ethnic products at the event.”

Informing that NEZCC and ICCR are also associated with them to help in their mission, Bordoloi said, “Local ethnic groups will get their stalls to showcase and sell their products. Moreover, different contests related to folk music, dance, sports will also be there.”

The main aims and objectives of NEIFACV, a non-government organization, whose main aims and objectives are cultural exchange (domestic and international), promotion of cultural heritage, organizing ethnic meet for cultural harmony, identification of folk artists, promotion of cultural tourism, to work for women empowerment, folk-based film/documentary making, creation of an international platform for all NE-based ethnic products and employment generation.

Bordoloi, who is also a PhD research fellow, Folklore Research, Gauhati University, informed that on April 19, the event would be inaugurated by Assam Cultural Affairs Minister Naba Doley, who will attend the programme as Chief Guest).

Chairman of Assam Tourism Development Corporation Ltd (ATDCL), Jayanta Malla Baruah, who will attend as Guest of Honour, will inaugurate the cycle rally.

On April 20, there will be performances of Daxavatar Nriya, Mishing dance, Thio Naam, Diha Naam and Jeng Bihu.

On April 21, there will be folk dance competition, folk-based documentary show and one act play.

On April 22, folk games will be held. At 1.30 to 4 pm, a discussion on ‘Samannaya’ – the ethnic meet will be organized which will be attended by Dr Anil Boro, HoD, Folklore Research, Gauhati University and Dr Rabindranath Sarma, HoD, Centre for Tribal Folklore, Language & Literature, Central University of Jharkahnd.