The Gauhati High Court has restrained the Assam government from selection of journalists for conferring media fellowship for the year 2020-21 till further order.

Gauhati HC Judge Justice Suman Shyam on Wednesday while  hearing a writ petition filed by Northeast Now editor-in-chief Anirban Roy over exclusion of online media from the media fellowship programme 2020-21,  said, “…the selection of candidate for conferring fellowship , if any, made in the meantime, shall be subject to further orders that may be passed in this writ petition.”

Although the court has not issued formal notice to the Assam government, it has asked to furnished copies of the writ petitions along with the order copy to the government counsel within three days.

The Assam government on October 5 issued a notification inviting proposals from experienced journalists of the state for the Media Fellowship: 2020-21 by October 27.

The Directorate of Information and Public Relation (DIPR) had issued an office memorandum on March 31, 2018 as guidelines for implementation of “media Fellowship” scheme for providing financial support to journalists for improvement of their professional skill and up-gradation of their knowledge in the relevant field of journalism. 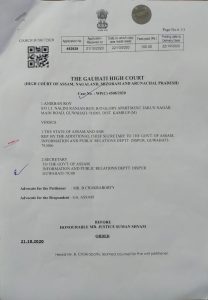 As per the guidelines, all mainstream media journalists of Assam, including freelancers, from print, electronic, online media and news agencies having  five years of experience in the field of journalism were eligible for applying for the fellowship.

However, the Assam government on September 18 this year published a corrigendum whereby the term “online media” appeared in the guidelines, has been kept in abeyance.

It is further mentioned in the corrigendum that the government issued the corrigendum because online media (web portal) had not been brought under the purview of the existing Advertisement Policy of the State, said petitioner Roy’s counsel B Chakraborty.

The government of Assam notified the Advertisement Policy, 2008, on 29.01.09. Under the advertisement policy in vogue, the basic guidelines and norms of government advertisement in news papers, periodicals and journals have been laid down.

However, it is also provided under the policy that the DIPR, Assam, may also issue advertisement in electronic media namely radio, TV, Internet and other media etc, he said.

Chakraborty said from the objective of media fellowship cited in the guideline dated 31.03.18 it would be apparent that the fellowship has no relation with the advertisement policy, 2008.

“Therefore the corrigendum citing the advertisement policy as the basis for excluding the media fellowship for the online journalists, is not maintainable in law. The government action in issuing the corrigendum is discriminatory and arbitrary and as such the same is liable to be quashed and set aside,” he said.

“The Advertisement Policy, 2008, does not include online media / web portal. The DIPR has been authorized to issue advertisement in all other media in addition to print media. Therefore, the very logic for exclusion of online media journalists from media fellowship by issuing the impugned corrigendum, is misplaced.

He further pointed out that while the government has issued Accreditation card to TV journalists but the online journalists have not been given the card due to which they are deprived of many facilities and also financial assistance etc.

In 2018-19, online media journalists were selected for the fellowship programme.

The court has posted the matter for further hearing on November 16.

Meanwhile, the DIPR on Thursday extended the deadline for submission of application for the media fellowship till November 3.