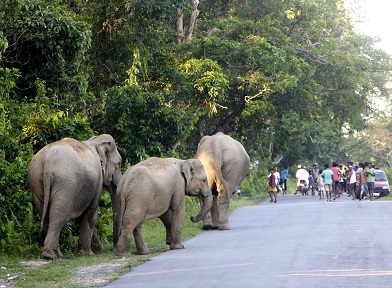 At least four people including one woman were severely injured during an elephant rampage in Guwahati’s Panjabari area on Friday early morning.

The residents of the area stated that an elephant herd was regularly seen moving in the area but this morning one elephant attacked the locals injuring four people.

The elephant entered Bagharbori and Panjabari of Guwahati and started destroying buildings and vehicles.

The forest department officials reached the spot, following the incident and managed to chase the herd away, reports GPlus.

There has been numerous incidents of the man-animal conflict in the past.