The first woman unit head of the country’s second lowest capacity Digboi refinery, Sukla Mistry during a media interaction in Digboi said that Digboi Heritage Refinery which has been the country’s second smallest refinery next to Myanmar is technically not feasible to be expanded in terms of capacity.

Mistry, who has been India’s first woman engineer to work earlier in her Qatar assignment was sharing various vital aspects associated with the refinery, its production capacity, expansion feasibility, procurement of raw materials and stiff market competition in the wake of global rising demands for petroleum products and by-products. 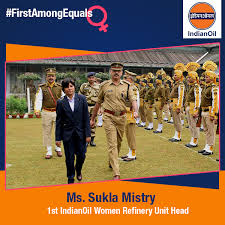 However, she opined that with concerted efforts of the officials and workers across the Assam Oil Division fraternity and people of the Oil town Digboi, the administration might be able to preserve the heritage refinery in all times with sustainable development adopting other viable means like cost reduction, enhancing quality product, cost effective  production and marketing of new and more essential products, checking the wastage of resources and recycling the matters, controlling pollution and treating the emitted effluents, promoting the cause of preserving greenery and other activities.

“We take pride that with enhanced efforts cent per cent of the raw material procured are being processed by Digboi refinery with its limited capacity which resulted in more than Rs 100 crores of profit during last fiscal year,” she said adding that ‘more cost effective strategies and judicious planning are being undertaken to ensure the overall prosperity of the Digboi Unit of Refinery and development of the place and people of Digboi’.

“Though one of the smallest endowed with the lowest processing capacity, the heritage Digboi Refinery can be the country’s best refinery,” she had remarked.

Meanwhile, indicating towards some of the impediments affecting the growth and development of Digboi refinery, Sunil Kanti, the General Manager (Maintenance) said there were some ‘inherent structures’ in Digboi including encroachments, labour issues, local disturbances, black marketing, surplus contractors that have been affecting the refinery in its functioning leading to ‘unbalanced scenario’.

Similarly, Manik Saikia, the general manager in charge of Assam Oil Division categorically highlighted some of the challenges confronted by Digboi refinery pertaining to availability of raw materials, processing capacity and oil pilferage and stiff competitions among the oil industries.