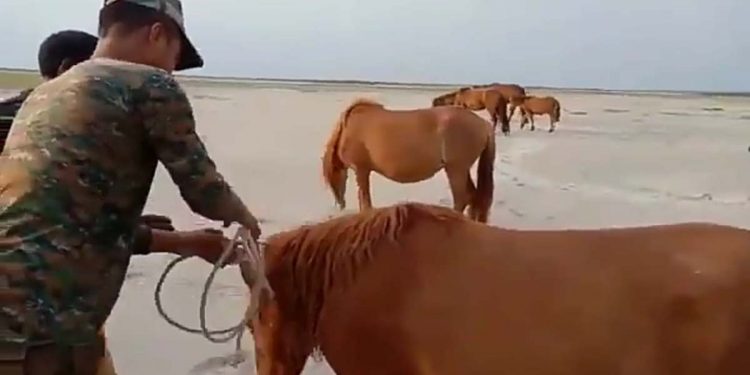 A ‘gang’ of ex-Indian Army personnel are engaged in smuggling of feral horses with forged documents from Upper Assam.

It has been established that the ‘gang’ used forged documents and used their “Army network” to transport feral horses from Dibru-Saikhowa National Park.

Involvement of ex-Army personnel in smuggling of feral horses from Dibru-Saikhowa National Park was exposed on March 2.

Assam Forest Department officials rescued six feral horses while being transported in a truck at the Makum bypass in Upper Assam’s Tinsukia district.

The feral horses were being transported in the truck (AS01 JC 0457) with the placard — “On Army Duty”.

During interrogation, a document was recovered from Subedar Khagen Baishya, which raised many eyebrows.

The document was an undated authority letter issued by the Guwahati Riding and Polo Club, signed by one Ashutosh (probably by Lt. Col. Ashutosh Tripathi), for one Detoza Cardoza. 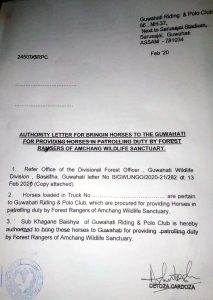 When contacted, Jitendra Kumar, DFO of Guwahati Wildlife Division told Northeast Now that he had issued no letters to the Guwahati Riding and Polo Club to transport horses from Dibru-Saikhowa National Park.

“The officials of Guwahati Riding and Polo Club had approached us to offer mounted-patrolling in Amchang Wildlife Sanctuary as a part of their corporate social responsibility,” Kumar said.

Kumar said he had agreed to the proposal of patrolling with horses as the terrain is difficult, and roads inside Amchang Wildlife Sanctuary is not motorable.

“They had mis-used my letter, which was specifically issued to allow horse patrolling in Amchang Wildlife Sanctuary,” Kumar said.

The DFO said he was shocked when the Assam Forest Department officials found that the letter was mis-used to transport feral horses from Dibru-Saikhowa National Park.

“I have immediately withdrawn the letter issued to the Guwahati Riding and Polo Club,” Kumar said.

After it was established that the ex-Army personnel were transporting the six feral horses illegally, Assam Forest Department officials on March 8 released them in Dibru-Saikhowa National Park.

Meanwhile, both Baishya and Singh have been forwarded to judicial custody for trying to smuggle feral horses.

Both Baishya and Singh have confessed that they were transporting the feral horses to Guwahati as per the instructions of Lt. Col. (retd) Ashutosh Tripathi.

According to reports, Lt Col (retd) Tripathi worked with the EME branch of the Indian Army, and is one of the promoters of the Horse Riding and Polo Club in Guwahati.

Based on confession of Baishya and Singh, investigating officers are now trying to locate Lt. Col (retd) Tripathi for interrogation.

Investigating agencies have come to know that Lt. Col (retd) Tripathi is into hospitality business, and runs resorts in Western India.

The Guwahati Riding and Polo Club is located close to the Sarusajai Stadium. The club is also planning to organise the National Junior Equestrian Tournament in 2020.