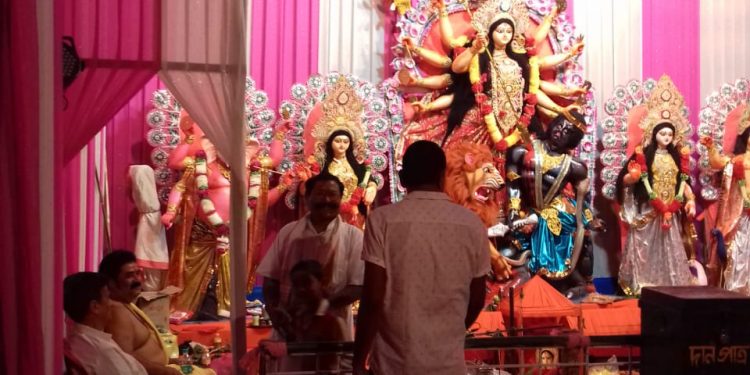 Along with the rest of Assam and Northeast, Durga puja festivities are going on in Dhemaji district with organization of puja celebrations and other cultural programmes.

It is observed that consumerism surrounding the Durga Puja celebrations has engulfed Dhemaji and other towns with large crowds thronging the shopping malls, cloths stores and hotels and canteens for the day.

Meanwhile, Dhemaji district administration has imposed prohibitory orders under Section 144 of CrPC in the district and against carrying of fire arms, playing of loud speakers, exploding crackers etc, while installation of CCTV at puja mandaps has been made mandatory.

It also framed guidelines for the puja committees to avoid traffic snarl and other problems for the commuters in town areas.

Security measure has been intensified in the district on account of the Durga puja and the police have been keeping strict vigil at railway stations, bus stands, market places and puja mandaps.

The district police has opened a call centre in front of Dhemaji Sadar police station with a helpline number and alerted the puja committees to report any problems or untoward situation during the puja occasions.

The district police has reviewed the security scenario for the Durga Puja in the district and alerted the public keep watchful eye on abandoned items and suspicious movement in the public places and inform the police immediately.

At least 20 puja mandaps are celebrating the puaj at different parts of Pasighat, Oyan, Ruksin, and Nari and Likabali areas of Siang belt.