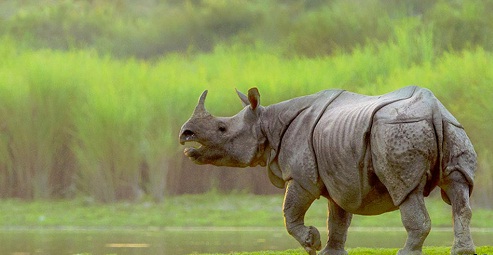 After the successful translocation of rhinos from Dudhwa national park to Belraya range of Dudhwa Tiger Reserve (DTR), officials are now planning to bring a male rhino to the reserve either from West Bengal or Assam.

It is aimed at saving Dudhwa rhinos from hereditary diseases as most of them are the progeny of same male rhino.

The Indian single-horned rhino is listed as ‘vulnerable’ in the IUCN Red List and is also included in schedule-I of the Wildlife (Protection) Act, 1972.

Deputy Director of DTR Mahaveer Kaujalgi said, “Our field director Ramesh Pandey has recently written to higher authorities, demanding at least one male rhino for the reserve either from Assam or West Bengal. We are yet to receive a formal reply from them.”

Dudhwa is the only place in the country where rhinos were reintroduced in 1984. Six rhinos were captured near Pobitara Wildlife Sanctuary in Assam under the reintroduction programme. Of these, one died in Guwahati zoo and two males and three females were translocated to Dudhwa.

Of the five animals, one female died before it could be released in Dudhwa. Another female died on July 31, 1984. With only one female and two males left, four young adult female rhinos were brought from Nepal in exchange for 16 elephants in 1985.

In December 2016, Bankey, the oldest rhino at Dudhwa, died at the age of 50. Among the 33 rhinos in Dudhwa at present, most rhinos are offsprings of ‘Bankey’.

The genetic study of rhinos in Dudhwa has not revealed any genetic disorder among them. But introduction of rhinos from outside is better than waiting for some genetic disorder to appear and threaten to entire rhino population in the area, state coordinator of WWF India Mudit Gupta, reports TOI.

At present, all the rhinos in Dudhwa are “camp ranging” as they are lodged in an enclosed 14.4 square km area. Plans are afoot that someday, these animals will be let out of their enclosures to move about freely. Forest officials said the aim is to eventually introduce rhinos in Katarniyaghat Wildlife Sanctuary and  Tiger Reserve as well.