Assam Chief Minister Sarbananda Sonowal on Saturday paid rich tribute to Dr Bhimrao Ramji Ambedkar, popularly known as Babasaheb, the father of Indian Constitution and one of the most iconic historical figures in India, on the occasion of his 127th birth anniversary.

Dr BR Ambedkar was not only instrumental in drafting the Constitution of the country, but was also a vociferous advocate of women’s rights and equality. Besides being the first Law Minister of independent India, he was also a jurist, economist and social reformer, who inspired many with his progressive ideologies. 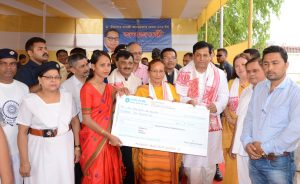 Offering a token of Rs 50,000 each to five newly married inter-caste couples, the Assam CM also reiterated the State government’s commitment towards promoting talents from the Scheduled Caste (SC) and Scheduled Tribe (ST) students. The Chief Minister also announced that his government will provide support to those opting for higher education and competitive examinations.

Ambedkar, who was born in a poor low Mahar (Dalit) caste, himself was a victim of the social evils since childhood days. He was so oppressed that throughout his life, Ambedkar campaigned to eliminate social discrimination against untouchables.