The Muga silk is the only natural resource that has the geographical identification with Assam. It is found only in Assam and the Northeast region of India in the world. The Muga silkworm, from which the yarn of the Muga silk is extracted, has been reared in the Brahmaputra Valley of Assam since time immemorial.

This has evolved in forming a cultural identity of the people of this region. It also has an important economic factor that has been enabling the people in becoming self-sufficient in producing quality fabric and clothing. Presently, amidst the burning issue of climate change and global warming, the Muga rearing has an important role to play for the maintenance of biodiversity and sustainable development. The Karha-Charikaria-Champara river basin area of Dhakuwakhana sub-division of Lakhimpur district is a traditional Muga silkworm rearing zone that has the potentiality of transforming the livelihood condition of thousands of rural population while contributing considerably towards preserving the biodiversity of the state.

Dhakuwakhana sub-division of Lakhimpur district, a flood affected area of the state, is known as the land of Muga culture of Assam. More than ten thousand families of this sub-division have been involved in Muga culture covering an area of one thousand hectares of land. According to Wild Silk Society, North East, an NGO, about 90% of Muga culture areas of Dhakuwakhana are concentrated in the Korha-Charikoria-Champora river basin covering an area of five hundred square kilometers. This area under Dhakuwakhana and Subansiri Revenue Circle of Lakhimpur district covers eleven Gaon Panchayaats namely Singiya, Dhakuwakhana North, West and East, Ghilamora, Deoliya, Bordoibam and Kekuri. Muga silkworm rearers of this area have been conserving this culture traditionally in generations and it has the biggest share of their annual income. 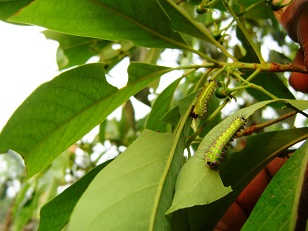 Muga silkworm is reared in the host plant called Som found abundantly in this region of Assam. It is estimated that one hector Som plantation could produce a harvest of two lakhs Muga cocoon in a year with a gross value of Rs 3.6 lakh per annum. This provides a net profit of Rs 2 lakh per annum according to 2012 market price. Further this gives a product value of Rs 7 lakh annually by successive reeling and weaving. Muga culture is also important for rural livelihood and generating employment.

Dhakuwakhana sub-division of Lakhimpur district is also one of the worst affected areas of Assam’s annual flood havoc. Muga culture is suitable for flood affected areas as it provide smooth livelihood for the affected people. It also checks land erosion and proper exploitation of barren and wasteland. The host plants of Muga silkworm are integral part of rainforest vegetation. Thus Muga culture is unique for sustainable conservation of environment and biodiversity.

The traditional Muga culture of Dhakuwakhana has been in decline since the mid-20th century. Habitat destruction, deforestation, use of pesticides and increasing brick industries have so far affected this great traditional culture to a larger extent. The lack of availability of breed is another major problem faced by the Muga reares in Dhakuwakhana. The Muga rearers of Dhakuwakhana depend upon the seed breeds produced in Garo Hills of Meghalaya and Sivasagar district of Assam. This costs five times more than the local price. The traditional methods practiced by Muga rearers in Dhakuwakhana have become slow and obsolete and lack of technology is affecting their unique culture. Similarly the declining number of the host plants for the Muga silkworm is another major worry for the people who are associated with this traditional culture.

It is popularly believed that the identity of Assamese culture is solely stands on three pillars—Assamese language, the Bihu and Muga Silk. A loss of any one of these would endanger the very essence of the Assamese culture. Therefore Muga culture is inter-related to the cultural identity, livelihood and ecology.  The state government should seriously consider in declaring the Dhakuwakhana region as traditional Muga rich zone of Assam.