The Autonomous State Demand Committee (ASDC) and its allies, Karbi Students Association-Samson Teron and Karbi Nimso Chingthur Asong (KNCA) have submitted a memorandum to Union Home Minister Rajnath Singh through the Deputy Commissioner of Karbi Anglong, urging the Central Government for creation of a hill state for Karbi Anglong and Dima Hasao in Diphu on Monday.

A procession was taken out from Semson Sing Ingti Memorial Park to DC office in which a large number of ASDC workers and supporters took part.

The memorandum stated that the ASDC, KSA and KNCA have been raising the issue of a hill state for Karbi Anglong and Dima Hasao in a democratic manner since 1986.

But the lack of real autonomy of the Sixth Schedule coupled with successive Assam government’s exploitation has manifested in growing deprivation and disadvantages for the people of two hill districts.

The successive state governments have indulged in stifling the economy of the hills and creating avoidable political tension by not releasing funds in due time.

It further mentioned that due to absence of effective mechanism under the existing Sixth Schedule has allowed successive state governments to impose authority by them upon these two hill districts. 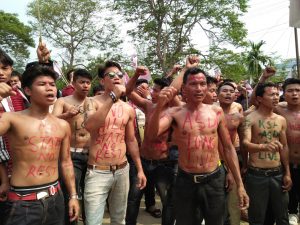 The memorandum also mentioned that due to absence of police protection in border areas, the neighbouring states and districts have encroached on the land of these two hill districts.

Since law and order and police subjects are under the control of State Government, the two Hill Autonomous Councils are toothless to protect their land and territory.

The memorandum also alleged that as the State Government is not providing police back up and encroachers are demographically burying the numbers of hill tribal communities and turning them into second class citizens in their homeland.