A view of the Oxygen plant, which is being set up at Samdrup Jhankhar. Image credit - Twitter

Bhutan will export daily 40 MT of liquid oxygen to Assam by the oxygen plant, which is being set up at Motanga Industrial Estate in Bhutan’s Samdrup Jongkhar district.

This has been confirmed by the Embassy of India at Thimpu.

In view of the present Covid situation, “Bhutan will supply liquid oxygen to India from a new plant being set up at the Motanga Industrial Estate, Samdrup Jongkhar district by M/s S.D. Cryogenics Gases Pvt. Ltd., a Bhutanese company,” the Embassy of India, Thimpu said in a statement.

“Every day, forty metric tonnes of liquid oxygen produced by the Oxygen Plant will be exported to Assam using cryogenic tankers,” the statement added.

Also read: Assam to bring in oxygen from Bhutan plant

The oxygen plant has domestic investment of 51% by M/s S.D. Cryogenics and FDI component of 49% by Meghalaya Oxygen Pvt. Ltd., an Assam-based Indian company, the statement said. 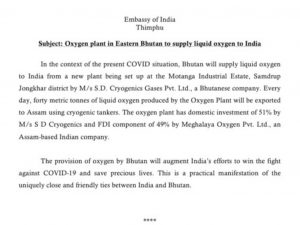 The provision of oxygen by Bhutan will augment India’s efforts to win the fight against Covid19 and save precious lives.

“This is a practical manifestation of the uniquely close and friendly ties between India and Bhutan,” the statement further said.

The work on the oxygen plant at Samdrup Jhankhar was stopped last year during the lockdown amidst the Covid19 pandemic.