Cong releases third list: Five in Assam; two in M’laya; one each in Nagaland, Sikkim

The Indian National Congress (INC) on Friday night released its third list of candidates for the upcoming Lok Sabha elections. 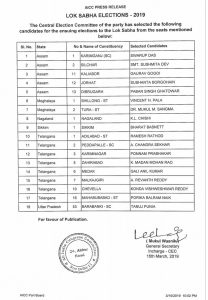 Out of 18 candidates declared, eight are from Telangana, five are from Assam, two from Meghalaya and one each from Nagaland, Sikkim and Uttar Pradesh.

Former Meghalaya Chief Minister Mukul Sangma has been fielded from Tura, the stronghold of former Lok Sabha Speaker late P A Sangma and his family.

P A Sangma’s daughter and former union minister is the NPP candidate in the Tura seat.

Sikkim Congress president Bharat Basnett will be in the fray from the lone seat in the hill state, while K L Chishi will be the nominee from Nagaland.

So far, the Congress has declared 54 candidates for the ensuing Lok Sabha polls, which held in seven-phase beginning April 11. The last phase of polling is scheduled for May 19. The counting of votes will take place on May 23.

The second list of 21 candidates was released on Wednesday