Students taking part in a rally taken out by AASU in Jorhat on Friday. Photo credit: UB Photos

Members of the Assam Congress legislature party are seeking an audience with Assam Governor Jagdish Mukhi to apprise him of the Assam Women’s University issue and ask him to take concrete positive measures so that the University can forge ahead with renewed vigour.

Nazira MLA and leader of the opposition in the State Assembly Devabrata Saikia told Northeast Now that they were seeking an appointment with Mukhi on Monday afternoon to discuss two issues,  one being the Assam Women’s University and the other being NRC. 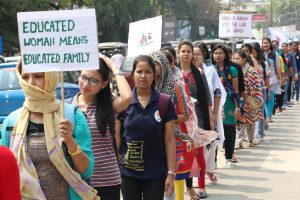 “In the absence of a permanent vice chancellor, Chief Minister Sarbananda Sonowal is in charge as chancellor and in the court he had attended he had assured that a vice chancellor would be appointed and academic council put in place so that the University could function properly, so what is this talk of a technical institute,” Saikia said.

Today the Satra Mukti Sangram Samiti of Jorhat Central College and students of DCB Women’s College students union formed a human chain in protest against the state government’s proposed move to do away with Assam Women’s University and replace it with a technical institute or an Institute of higher studies, as stated by state Education Minister Himanta Biswa Sarma to the media and elsewhere.

The protests entered the fifth day on Friday after the students did a two-day hunger strike on March 19 and 20.

A memorandum was also submitted to the chief minister in this connection.  Bhairob Bora in his speech demanded appointment of a permanent vice chancellor and improving infrastructure and other measures to make the University a full-fledged one.

Debashree Bora stated that until the government came clean on the issue, the students would continue agitating.