CAB protest: Another martyred in police firing at Guwahati 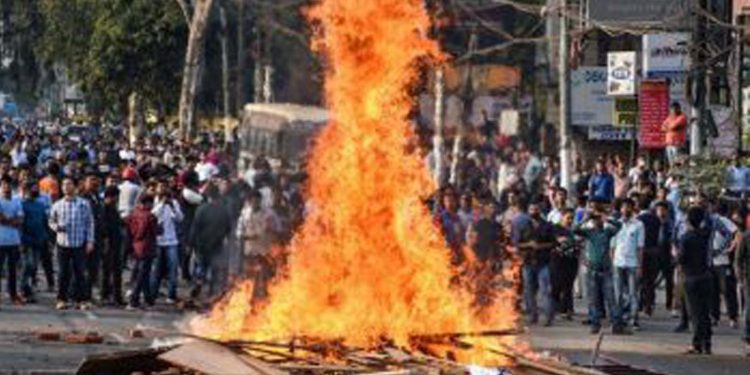 Another anti-CAB protestor was killed and three others were injured in police firing at Guwahati on Thursday.

The deceased is the second martyr of the anti-CAB protests in Assam.

The firing incident took place at Sankar Path near Hatigaon High School in Guwahati in which one of the protestors died on the spot.

The injured have been rushed to the Gauhati Medical College and Hospital (GMCH).

Earlier, one of the two anti-CAB protestors, injured in the CRPF firing on Thursday in Guwahati, died in the hospital.

He is the first martyr of the anti-CAB protests in the state.

The victim was identified as Dipanjal Das, who served as an employee of the canteen at Sainik Bhavan, Rajgarh Road.

Das was a resident of Chaigaon in Kamrup (Rural) district.

He received bullet injuries in his abdomen.

The firing incident took place at Lachit Nagar area in Ulubari of the city.

The other protestor received injuries in his leg.

Both of the injured, who are above 18 years, have been immediately admitted to the Gauhati Medical College and Hospital (GMCH).

The anti-CAB protests turned violent in the Ulubari area when the protestors pelted stones at the police and CRPF personnel.

The situation in Guwahati continues to remain volatile since Wednesday.

A large number of CRPF personnel have been deployed in Guwahati besides the Army.

The Army has taken out flag march in the city to tackle the deteriorating law and order situation due to violent protests against the Citizenship Amendment Bill (CAB), 2019.

Earlier in the morning, at least ten protestors were injured during clashes with security personnel at Lalung Gaon in Guwahati.