CEM Depolal Gorlosa delivers his speech in the Assemble Session on Monday.

The North Cachar Hills Autonomous Council (NCHAC) passed two Bills at the Budget session of the Council held at the Council Assembly session hall on Monday.

A Bill on provincialisation up to secondary level and regularization of educational services in Dima Hasao district was passed at the session. Another bill – Constitution of North Cachar Hills Autonomous Council, Forty-seventh Amendment Bill 2017 was also passed.

The budget speech presented by Debolal Gorlosa, Chief Executive Member, who is also in charge of the Financial Affairs of NCHAC presented a detail Annual budget estimates and expenditure of the council for financial year 2018-19.

Gorlosa highlighted the works under process under the MoS and released fund of 2591.82 lakh out of the total sanctioned amount of Rs 12208.90 lakh. In regards to Lower Kopili Hydro Electricity project, MoA has been signed with Assam Power Generation Corporation Ltd (APGCL) which has agreement of 5 pc free power in terms of money to the council from the date of commencement of the project and 80% of employment for the project from within the district of Dima Hasao.

Further stating about the announcement by the Finance Minister of Assam in the budget speech regarding establishment of B Ed College and Horticulture College in Dima Hasao, the government also enhanced the budgetary allocation as special grant for development purpose from Rs. 20.00 crore to Rs 50.00 crore for the coming financial year . 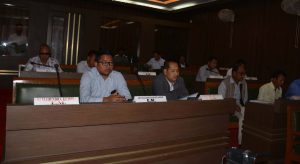 1000 bighas of land for the ACS Training Centre in Umrangso has been allotted and assessment of excess land occupied by NEEPCO is under process which will be thoroughly done and appropriate action taken accordingly. The Krishi Bigyan Kendra at Haflong has been inaugurated at Haflong too along with the rest of the country which will enhance better yield of the agriculture crops of the farmers.  Another water supply project for Rs 15.00 crore and N L Daulagupu Mini Stadium for Rs 16.00 crore under NLCPR is under progress said the CEM.

CEM Gorlosa also presented that according to the proposed estimate of revenue receipt from council own is Rs. 70.18 crore and Rs. 53.49 is the proposed estimate receipt from the state government as grant-in-aid for council salary and including 3.49 crore for works. Again in the expenditure side the total proposed amount for Rs. 152.50 crore, thus with the budget closing deficit will stand to the tune of approximately Rs (-) 28.84 crore.

The total budget allocation provided by the State to the entrusted departments is Rs 676.72 approximately has been granted in the House.