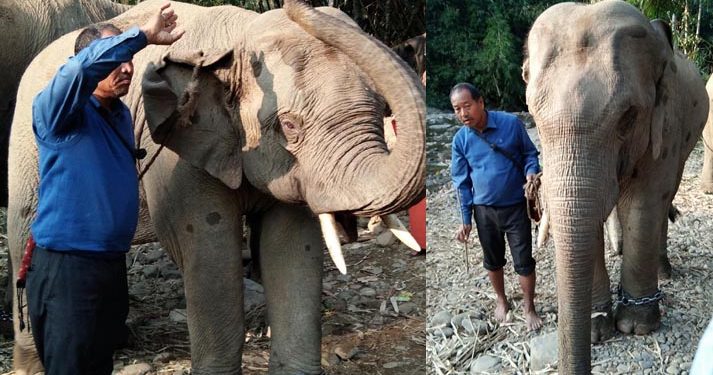 Babulal, one of the elephants, being sent to Ahmedabad. Image credit - Northeast Now

Braving heat of North India and bending rules, four elephants from Assam are set to start a perilous journey to Ahmedabad to add to the grandeur of the famous Jagannath Temple.

According to sources, the Assam Forest Department officials are in the process of completion of the formalities to send the four elephants, including two females to Ahmedabad.

The four elephants from Assam are being taken to Ahmedabad ahead of the Rath Yatra scheduled to be held on July 4 in Jagannath Temple.

As per traditions, elephants have the first glimpse of Jagannath, Balabhadra and Subhadra and lead the procession. The Chief Minister of Gujarat performs the Pahind Vidhi or the symbolic cleaning of the path for the chariot of Jagannath.

The Jagannath Temple, located in the Jamalpur locality of Ahmedabad, was established by Sadhu Sarangdasji about 450 years ago.

The temple is famous for its annual chariot festival, the Rath Yatra, which is the third largest after the Rath Yatra at Puri and Kolkata. It passes through different parts of the city of Ahmedabad covering a distance of about 14 kms.

Confirming the information, Ranjan Kumar Das, Conservator of Forest, Upper Assam told Northeast Now on Monday that the four elephants will be transported to Ahmedabad by train within the next 48 hours.

Das said he is making the arrangements because Assam Forest Department has officially granted permission to transport the elephants and the Gujarat government has also issued the no-objection certificate.

“We are trying to make arrangements for the elephants to travel in a special coach attached to a passenger train,” Das said, adding that attendants and veterinary doctors will also travel with the elephants.

The Conservator of Forest said it is going to take about four days to travel from Tinsukia in Upper Assam to Ahmedabad if connected to a passenger train. “Sending the elephants in a goods train is impossible,” he said.

“There is excessive heat in North India. So, our clear instruction is to carry a lot of water to spray on the elephants within a specific interval,” Das said, adding, “Otherwise, the elephants are going to suffer a lot in transit.”

Das said the elephants are being sent to the Jagannath Temple in Ahmedabad for a period of six months, and it would be the responsibility of the owners to bring them back to Assam.

While elephant lovers are up against the centuries-old traditions of temple elephants, the journey of the four elephants from Assam to the Jagannath Temple in Ahmedabad has raised many an eyebrows.

A section of wildlife activists in Assam are of the opinion that the four elephants are not going to return to their owners in Assam after six months, and continue to be the pride of the Jagannath Temple of Ahmedabad.

In the past, several elephants from Arunachal Pradesh and Assam were leased for six months to temples in Kerala, Gujarat and other states. Unfortunately, none of the elephants returned to the original owners.

According to reports, two of the four elephants being sent to Ahmedabad are not captive born. Two of them were caught in the wild and were domesticated, and the micro-chips were implanted on them on June 15.

The ownership certificates for the two elephants have also been issued specially to ease the process of transportation of the elephants to Ahmedabad. It was a clear case of violation of the Supreme Court’s orders.

Surprisingly, PCCF (Wildlife) of Assam, Ranjana Gupta refused to comment on the issue, and subsequently switched off her mobile phone.

According to sources, at present, the Jagannath Temple in Ahmedabad is proud owner of 13 elephants and most of them were taken from Assam and Arunachal Pradesh.

But, the health conditions of all the elephants are bad and most of them are suffering from acute skin infection and are dehydrated.

During the last few months, veterinary experts have inspected the elephants, and one of them is from Assam. The experts had reportedly suggested clean and better living conditions for the animals.