At a time when the ruling BJP has been beating its own drum of zero tolerance against corruption, the Barpeta district unit of the party has discharged and show-caused the president of the party’s Barpeta Nagar Mandal committee for his alleged involvement with a lottery racket.

The development took place after an audio conversation between BJP’s Barpeta Nagar Mandal committee, Mukut Ranjan Das and one Madhu Sutradhar, member of a lottery racket, went viral on the social media.

The audio recording of the conversation between the two reveals how Mukut Ranjan Das was bargaining for Rs. 5 lakh from Madhu Sutradhar on behalf of the lottery racketeers to allow the game of lottery in Barpeta district.

Madhu, on the other hand, agreed to pay Rs. 2 lakh for allowing the game of illegal lottery.

The viral audio between the two has led the people to question the ‘zero tolerance’ slogan of the BJP-led government in Assam, which have come to power in 2016 promising “parivartan”, meaning ‘change’ in Assamese.

“An audio recording that have become viral on social media recently have proved that you have demanded Rs. 5 lakh from lottery racketeers. The dishonest way you have adopted to collect illegal money from lottery racketeers holding a responsible position of president of BJP’s Nagar Mandal had affected the image of the party negatively. You are discharged with immediate effect from the post of President of Nagar Mandal and you are asked to explain within seven days why there should not be disciplinary action against you,” the discharge letter issued by President of BJP’s Barpeta District unit, Sankar Chandra Das said. 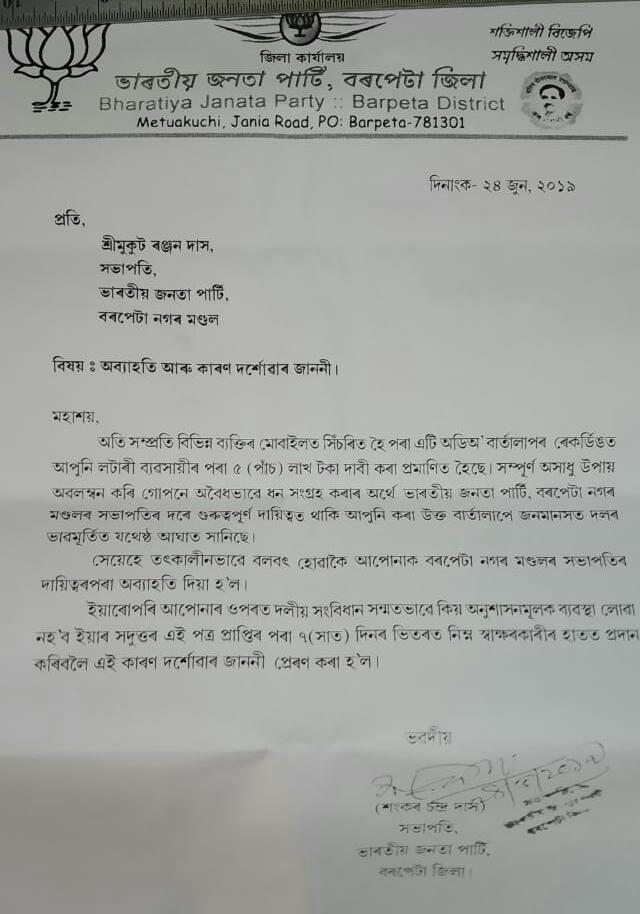 The development assumes significance as the BJP led government in Assam often claims of adopting a zero tolerance towards corruptions.

Lok Sabha MP from Nowgong Lok Sabha constituency and former Minister Pradyut Bordoloi has recently alleged that Assam CM Sarbananda Sonowal has been involved in the coal-syndicate running in the Margherita Assembly constituency.

The Congress leader also alleged involvement of administration, forest department and the Assam government officials and media persons in the syndicate.