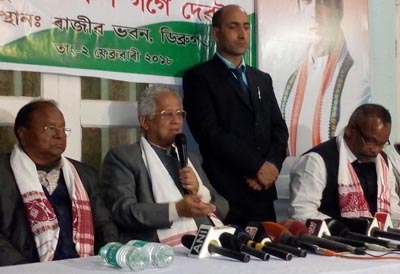 Former Assam Chief Minister Tarun Gogoi on Friday said the loss of two Lok Sabha seats and one Legislative assembly seat in Rajasthan is a great setback for the Bharatiya Janta Party (BJP).

Gogoi said, “The BJP has suffered a major blow after losing the seats ahead of assembly election.The BJP have lost two Lok Sabha seats in Alwar and Ajmer and one Legislative assembly seat in Rajasthan.”

Speaking to reporters at Rajiv Bhawan here, the former CM said, “In Rajasthan two Lok Sabha seats and one Legislative assembly seat the BJP have lost against Congress which shows that bad days of BJP have started because they have failed to meet the demands of people. The BJP have failed in last four years in centre and now they have realized that they have done nothing in the agriculture sector. So, they prepared the budget for the agriculture sector to hide their failures. In  last four years they have failed to do so.”

“Rising instances of Kidnapping and extortion has been rise in the state especially in Tinsukia district and the BJP government has failed to control such activities. The BJP government which had committed to ‘acche din’ before coming to power has turned into ‘Kharab din’ for people,” Gogoi said.

Gogoi further added that in the last two year the BJP has not created any jobs for the unemployed youths. “On one hand BJP wants to root out corruption, on the other hand their leaders are involved in corruption. After BJP came to power coal syndicate has been rampant in the state and the government has been doing nothing to curb such illegal activities,” he said.