BJP-AGP using NRC as a tool only to benefit foreigners: Mancha

AGP-BJP using NRC only for the benefit of foreigners, says Upamanyu Hazarika 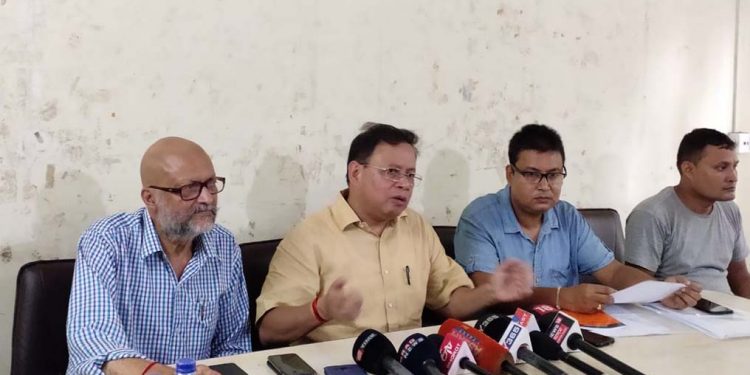 The Prabajan Virodhi Manch has slammed the ruling BJP and its ally AGP for ‘using the NRC as a tool’ only to benefit foreigners.

Manch convenor Upamanyu Hazarika said NRC was a political tool for all the leaders who were a part of the BJP-AGP alliance.

He said they are using it only for the benefit of foreigners, even though their political careers and livelihoods had been built on espousing the cause of expelling foreigners.

“Now, it was the turn of State BJP president Ranjit Dass to showcase his ignorance, yesterday at a press conference he said that NRC would be re-done in Assam and for which the people of Assam will have to be prepared to make sacrifices again,” Hazarika said.

Dass had also said that a large number of foreigners had been included for which the new exercise was necessary.

Hazarika said that Dass had conveniently overlooked the facts that it was during the tenure of the present BJP government in the Centre and the State that the NRC exercise had been carried out and there was no guarantee that a fresh exercise would not yield the same result.

“It is also a fact that these leaders showed no interest in the NRC exercise particularly the instances of fraud which came to light virtually on a daily basis, because they were busy trying to include Hindu Bangladeshis through the Citizenship (Amendment) Bill,” he said.

“None of these leaders have any sincerity and it is only when they realise that there is a ground swell of popular anger against the inclusion of large number of foreigners in the NRC that they are now making these frivolous comments to mislead the people,” Hazarika said.

The need is not for a fresh NRC exercise but for a re-verification in migrant dominated and border districts where a large number of foreigners were included through fraud and subversion during the field verification process, he alleged.

Hazarika further said that when all leaders of other Northeastern states cutting across party lines had vehemently opposed CAB, the leaders of Assam stood out as a shameful exception showing no spine in defending and protecting their own people.

“Even after five years of the NRC process when it is clear to any lay person where the fault lies and that re-verification is the answer, those who hold the reign of power chose to be ignorant,” he added.