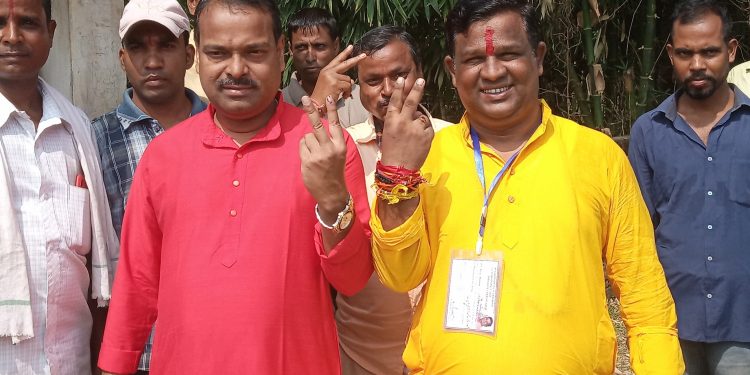 Karimganj MP Kripanath Mallah along with BJP candidate BIjay Malakar after casting his vote on Monday.

Polling for Ratabari constituency by-elections along with three other assembly seats in Assam began from 7 am on Monday.

The Ratabari constituency has witnessed a direct fight between the two political arch rivals–the Congress and BJP.

Although four candidates are in the fray for the seat, all eyes are will be on Bijay Malakar of the BJP and Keshav Prasad Rajak of the Congress.

Two other candidates of the constituency are—Birendra Ravidas of SUCI (C) and Parikhit Roy (Independent).

As the voters of Ratabari started to make their way for their respective polling booths to cast their votes, hordes of journalists were seen lined up outside the house of Karimganj MP Kripanath Mallah at Bidyanagar.

Malla vacated the seat after he won the Lok Sabha polls from Karimganj constituency in May, 2019.

Speaking to Northeast Now , BJP candidate Malakar at the residence of Mallah said that he was confident of winning the polls.

Malakar added, “Everyone is going to vote for the BJP. All have seen the development works done by the Narendra Modi government during the last six years.”

Karimganj MP Mallah, who cast his vote at Lower Primary school polling booth close to his residence, said, “People would vote for the BJP only for the development works carried out by us in the past three years. Many projects are in progress and some are about to begin and I would help Bijay Malakar in the completion of all these in the next one and a half years.”

Exuding confidence, Keshav Rajak of Congress said that more than 80 percent votes of the tea garden community would go in his favour.

“You see, it is for the first time since our independence that a national political party has chosen a candidate from Nivia in Durlavchera region, which is underdeveloped as well as landlocked,” he said.

“I am being a member of the tea tribe sure that more than 80 per cent votes of the tea community would go in my favour. Apart from that I will also get votes from minorities. And above all I am a permanent resident of Ratabari constituency, voters will definitely prefer me than an outsider (read Bijay Malakar),” Rajak said.

At the time of filing this report, polling has been going on peacefully in 202 booths in the constituency.