The process of metamorphosis of the change for better is almost at its penultimate stage for Assamese cinema.

What better testimony of this predicament is the fact that Assam has scripted a golden era in the history of cinema with twin representations in the run for Oscars for the country!

Assamese cinema has been witnessing a sea-change in story telling lately with young, talented and committed filmmakers experimenting with themes hitherto explored.

Newer concepts, human predicaments, new techniques of putting across one’s understanding of certain facades of human existence in today’s world has intrigued these new breed of filmmakers and they are not shying off scripting their stories on celluloid with a whole new perspective.

Who could have imagined Village Rockstars around a decade back in Assam or for that matter in the country, known to be second largest movie producing nation after the United States.

Movies like Village Rockstars have propelled Assamese cinema to new heights like never before in these hundred years of film-making in the State.

A coming-of-age movie written, edited, co-produced, and directed by Rima Das– Village Rockstars surprisingly comes from a self-taught filmmaker who has no formal training in film making.

Otherwise a simple story that can easily be found in any story books, the plot employs twist in the tale with its protagonist Dhunu, a minor village girl who aspires to be a rock star.

Fantasies run high as she forms her own band amid her growing up in deprivation.

She learns to manage her life within the surroundings of hostile natural calamities and sets the platform to weave dreams of owning a guitar!

Set at Kalardiya village of Chaygaon in Assam’s Kamrup district, the 10-year-old dwells with her widowed mother and an elder brother.

Her flight of fancy takes wings as she gets mesmerized by a band performing nearby where she accompanies her mother to sell snacks.

Reading a comic book, the protagonist with her impressionable mind decides to form a band playing real instruments.

Fighting all odds of her impoverished upbringing, she saves penny by penny to buy a guitar, but destiny has something else in store with the perennial floods ravaging her village like every year.

Yet Dhunu’s brilliance in everything she does transforms the cheesy bromides into a rallying cry for hope and self-reliance.

The movie also touches upon many predicaments that one continues to encounter in Indian villages.

For instance, it unflinchingly tackles the disturbing manner in which village elders force girls who reach puberty to suddenly confine themselves at home and have little or no contact with the outside world.

The movie winning the coveted National Film Awards, the only second Assamese movie after Jahnu Barua’s Halodhia Choraye Baodhan Khai which bagged the award 29 years ago goes on to prove the authenticity of storytelling with fresh concepts flavoured with ethnic cultures and traditional values.

The natural elements, like the unseen locations, an authentic cast of non-actors, and organic story-telling helped the movie win critical appreciation nationally and internationally and caught the fancy of everyone – even to the extent of it being nominated as India’s official entry to the Oscars beating quite a plenty of biggies. 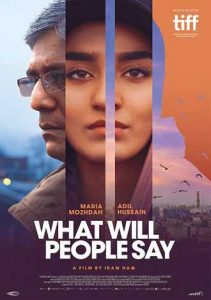 Co-produced by Norway, Germany, Sweden, France and Denmark, the film follows 16-year-old Nisha, a Pakistani teenager in Norway who is sent back to her extended family on the subcontinent when she seemingly soils her family’s reputation.

‘What Will People Say’ is set in Pakistan and Norway and traces how a Pakistani immigrant family deals with its teenage daughter’s affair with a local boy in Norway.

Adil, who played the role of a doting yet controlling father in the film, has already won the Kanon Award at Kosmorama film festival, which is Norway’s equivalent of the Academy Awards.

Now it remains to be seen how these two glittering jewels of Assam shine on the gala Oscar night on February 24 next year.