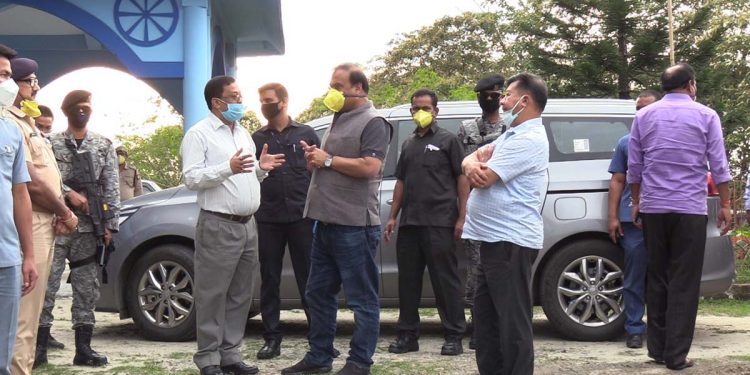 Over 390 students from Assam, who were stranded at Kota in Rajasthan, will be arrive at Srirampur Entry Check gate across Assam-West Bengal border by Sunday.

“On their arrival, each of them will be firstly screened at Srirampur entry gate and then will be sent to Sarusajai quarantine centre located at Guwahati,” Assam health minister Himanta Biswa Sarma told reporters at Dhubri on Saturday.

“Although they were quarantined at Kota as they are travelling now and will be passing through several states and might be infected,” minister sarma said.

Before their entry in Assam, health examinations of all of them will be done at Srirampur properly and then will be allowed to go to Sarusajai quarantine centre, the minister said.

“Only those persons, who are found with no COVID19 symptoms, will be sent to Sarusajai quarantine centre; otherwise, they will be kept at Srirampur quarantine centre till further order,” said Sarma.

One quarantine centre with a capacity of accommodating 1,000 persons is being constructed at Chagolia of Dhubri district along the Assam-West Bengal border.

The other quarantine centre is being constructed at Srirampur of Kokrajhar district for the travellers who want to enter Assam on or after the withdrawal of nationwide lockdown, said Sarma.

The health minister also said, “Our special emphasis on Dhubri and Kokrajhar districts along the West Bengal border to identify the COVID19-affected persons as the cases are rising in the neighbouring state.”

“Although Kokrajhar district has no COVID19 case so far, but we will keep strong vigil on the overall development of neighbouring Dhubri district amid COVID19 pandemic,” he added.

As Dhubri district has registered five COVID19 positive cases, special surveillance activities will be carried out in the district.

Accordingly, at the preliminary stage, the health department has decided to conduct random tests of swab samples of 150 people residing in the containment zones of Dhubri district namely Chapar, Bilasipara and Dhubri town on Sunday.

“More such tests will also be conducted in future if required,” Sarma told the media during a press conference held at Chapar of Dhubri district on Saturday.

Sarma further clarified that it will not be a rapid testing but random tests based on swabs collection.
The swabs from Dhubri will be tested at Fakhruddin Ali Ahmed Medical College and Hospital of Barpeta.

Dhubri is one of the five hotspot districts in Assam with cluster zones.

The other four districts are Golaghat, Marigaon, Nalbari and Goalpara.

No decision to re-open shops in Assam till April 27

Regarding the recent order of the Union home ministry on relaxations to re-open shops, Assam health minister Himanta Biswa Sarma said the state government would not implement the relaxations order for the next two days and the nationwide lockdown would continue in force.

“On April 27, Prime Minister Narendra Modi will have interactions with the chief ministers of the country through video conferencing and only after that, the state cabinet will decide on it,” said Sarma.

“The students coming from Kota in Rajasthan will be offered light refreshment by the district administration at UN Brahma College in in Chirang. For this purpose, tourism minister Chandan Brahma, deputy Commissioner and superintendent of police of Chirang district will make necessary arrangements for the students,” said Sarma.