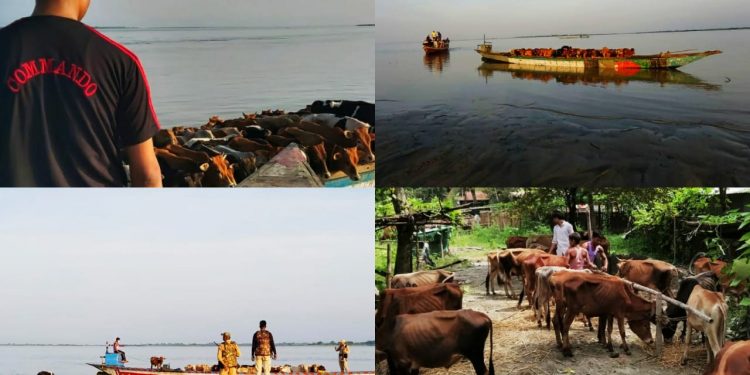 The Lower Assam’s Dhubri district police  has launched a massive drive against the cattle smugglers gang active across  the Indo-Bangldesh International border and seized over 300 cattles worth over Rs three crore from the different border village areas of duo districts namely Dhubri and South  Salmara Mankachar since last one week.

The Supertendent of Police of Dhubri district Ananda Mishra has constituted a Special Investigation Team who is continuously conducting the raid in different locations including the riverine areas identified as the route for the cattle snuggling.

And acting on a specific input about the major catches of cattle were being carried out through boats, a police team led by Trinayan Bhuyan, Deputy Supertendent of police (HQ),Dhubri has launched a drive in swallowing river water bordering to South Salmara Mankachar district of Assam and seized as many as 97 cattles on Thursday night.

Trinayan Bhuyan,Deputy Supertendent of police,Dhubri who was leading the yesterday’s operation said,” Four boats carrying the cattle, suspected to be meant for smuggling, were chased by our team for few hours in swallowing river Brahmaputra under testing conditions in the bordering areas lying between Dhubri and South Salmara Mankacher district near Birsingh Char and before they could be captured”.

During the operation few of the cattle which were deliberately dropped into the river water were also recovered by our team, said Bhuyan.

Adding more, Bhuyan said police has also opened fire in an attempt to stop the fleeing boats and only after that the suspected smugglers abandoned the boats but taking advantage of night hours and seemingly familiar territory, jumped into water and managed to escape.

After getting information that one of the fleeing smugglers identified as Hasem Ali of Purar char of South  Salmara Mankachar district has got shot in his buttocks and has already been referred for medical treatment to Dhubri Civil Hospital today,said police.

Anand  Mishra, SP ,Dhubri told the media persons on Friday that,” Police have vigil  a close eye about the every movement of cattle throughout the district and have also identified few active smugglers in district  and accordingly a manhunt to book them has already been initiated.”

“Any persons involved in any kind of illegal trade weather it is cattle,drugs or elsmore could not be escaped and all these persons would be  behind the bar very shortly”,said Mishra.

Notably,illegal cattle smuggling is on the rise once again through the riverine border of South Salmara Mankachar and Dhubri district of Lower Assam despite the deployment of adequate security forces.

And from the very beginning Cattle smugglers have preferred to transport the illegal supply of cattle to Bangladesh using the Brahmaputra River route passing through the duo district.