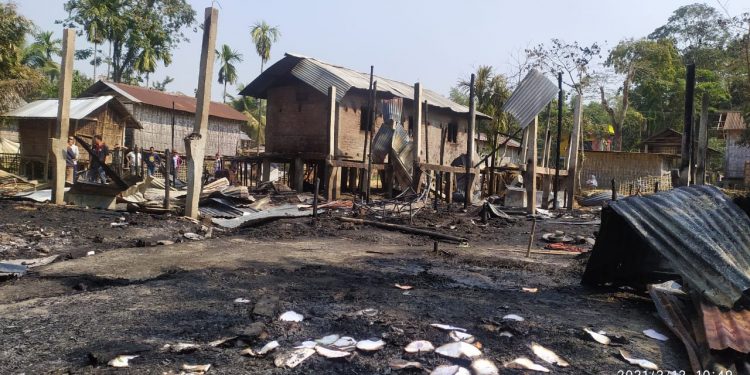 Locals said the fire broke out around 10.45 pm when everyone was asleep.

In a humanitarian gesture, members of an organisation in upper Assam’s Jorhat district, have given Rs One lakh, which they collected to celebrate Ali Ai Ligang, to four families.

The houses of the families were reduced to ashes in a massive blaze on Thursday night.

Following the incident, the members of Jnyan Jyoti Yuba Sangha of Sonari Mising Gaon at Teok decided to forego celebrating the spring agriculture festival of the Mising community and gave the entire amount to the families.

Locals said the fire broke out around 10.45 pm when everyone was asleep.

“People of the village were able to contain the fire from spreading further by throwing water and mud,” said a local.

“The fire tender which came at about 11.30 pm from Teok could not douse the fire as it did not have sufficient water. Another one which was called from Jorhat managed to extinguish the flames but not before the houses were razed to the ground,” the local said.

The youths who were preparing for the Ali Ai Ligang festivities decided to give the Rs one lakh to the families to rebuild their houses.

They are also helping them by bringing bamboo and other materials, he added.