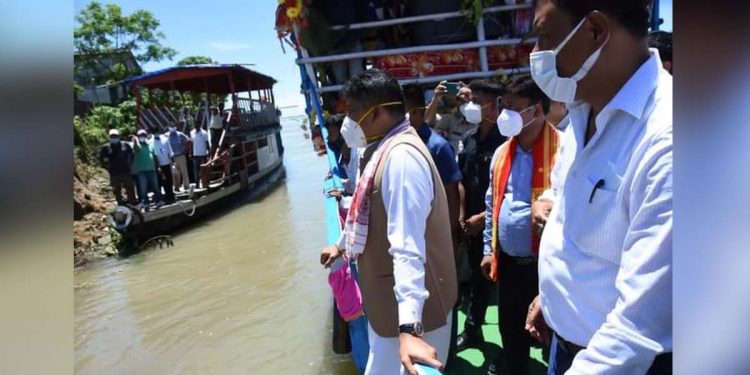 The minister, accompanied by water resources officials and local MLAs visited Burijan, Rohmoria, Bogibeel and Dehing Jerai and took stock of the embankment repair works and directed the officials to carry out erosion-control works on a war footing.

Hazarika said embankment construction and repair works have been accelerated across the state.

He directed the officials to end all the embankment repair works by the month of May every year.

The minister said only temporary and emergency works should be carried out during the rainy season.

“To get rid of the flood problem, I have directed the officials to conceptualise and build embankments in a scientific manner. They have been asked to use porcupine and geo-bags to stem the river erosion along the embankments,” minister Hazarika said.

“I have issued strict instructions to the officers to complete all official procedures and formalities on time so that repair works can be started on time,” he added.

Earlier in the day, Hazarika visited the tomb of Swargadeo Sarbananda Singha, located on the bank of the Brahmaputra in Guijan area of Tinsukia district to pay homage to the first ruler of the Mattack kingdom.

In view of the threat of flood in the area, minister Hazarika asked the district administration to take steps to protect the tomb from being eroded by the Brahmaputra.

The minister promised to re-visit the area within a month to review the situation.

The minister also visited areas like Natun Gaon, Rangagora, Tengabari, Mirigaon and Rowmari and undertook a 35-km ride on boat to the heart of the Dibru-Saikhowa National Park to assess the pre-flood situation and flood preparedness.

Due to flood and erosions, every year, Assam has to lose huge landmass.

Despite several steps taken by the government, no permanent solution has come out to solve the decade-old problem of erosion.