The additional chief electoral officer of Assam has requested the deputy commissioner of Udalguri district to take action against an erring poll officer who had allegedly refused entry to a senior journalist into the polling station. 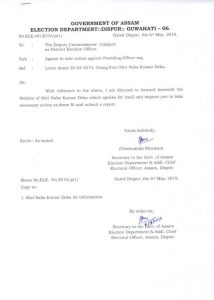 Based on the written complaint put by a senior journalist from Orang in Assam’s Udalguri district of a Guwahati based vernacular daily, Naba Kumar Deka that he was denied entry into a polling station during second phase of Lok Sabha Polls 2019 by the on duty presiding officer the secretary, government of Assam, the election department and additional chief electoral officer,Vivekananda Phukan vide letter no.ELE/49/2019/pt1 requested the deputy commissioner of Udalguri district to look into the allegations and take action.

This was stated by Naba Kumar Deka, the petitioner scribe on Tuesday.

It is to be noted that the presiding officer on duty at polling station no 84 stationed at Gelabil High school on April 18 last in the second phase of general elections allegedly didn’t allow the senior media person into the polling station despite after showing his valid special identity card issued to him by the ECI.

Being humiliated, Deka put a written complaint against the officer to the ECI on April 20 last and as part of it’s response, the additional chief electoral officer requested the deputy commissioner on Monday to look into the matter and take necessary action.