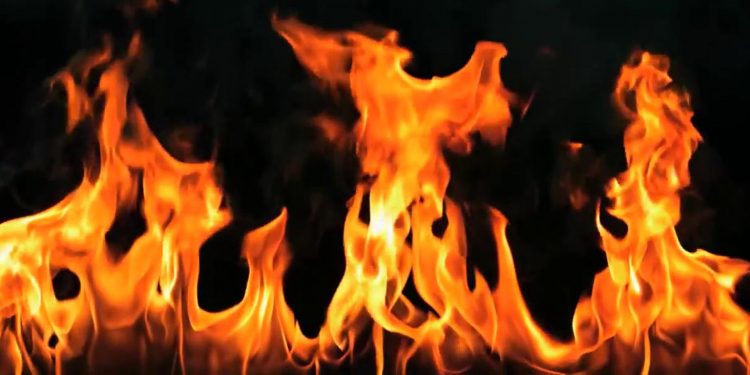 Two persons were killed and three seriously injured when a major fire broke out at AT Road near Tocklai bridge area of Jorhat on Sunday night.

Jorhat Deputy commissioner Roshni A Korati informed that 13 fire tenders from Jorhat and neighbouring Sivasagar and Golaghat districts were pressed into service to douse the inferno.

The blaze which began at about 11.30 pm was extinguished at about 4 am.

Fire Brigade personnel are yet to ascertain the cause of the fire which gutted two buildings, one two-storey and the other three storeys.

“A major fire incident at Thakur Bari area of Jorhat town in which 13 fire tenders of State fire service, ONGC, Air force, NRL and from nearby districts engaged to control the fire. Five injured persons were shifted to JMCH out of whom two have expired, ” the DC said.

The two buildings were those in which the  Singhi scooter spare parts shop was located and it spread to Pawan Furnitures by its side.

Among those who died were Gomti Devi (72) and Satyanarayan Agarwal (75).

The injured who have been shifted to Dibrugarh AMCH are Mahendra Agarwal (58), Krishna Gopal Agarwal (55) and Usha Singhi (50).

They all l belonged to the Singhi family, owners if the Singhi scooter spare parts, from whose house the fire had spread.

A Fire Brigade personnel said that apart from the fire tenders in Jorhat, firefighters had come from Teok, Titabar, Mariani and as far as Amguri in Sivasagar district.

The damage caused is yet to be assessed.