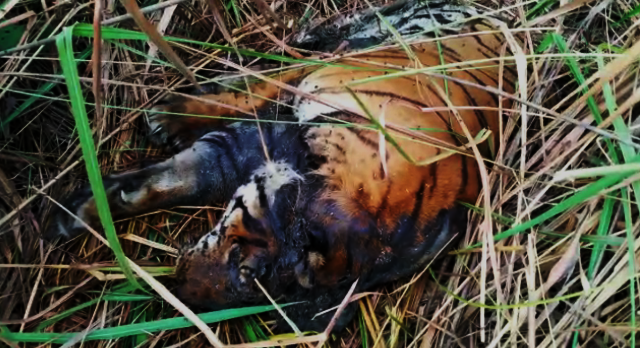 Forest officials on Wednesday recovered a carcass of a Royal Bengal Tiger at Kaziranga National Park.

The body of the tiger was recovered from the bank of Mihibali under Kohora range of the national park.

Sources informed that the tiger might have died around three days back.

Forest officials further said the back portion of the dead tiger has already been eaten by some other big cats.

Forest guards on Wednesday evening discovered the carcass while taking the elephants for a stroll.

Later, at night the forest guards had witnessed other tigers feeding on the carcass.

On Thursday morning, post mortem was conducted on the carcass by a team of veterinarians led by Dr Pranji Basumatary of Centre for Wildlife Rehabilitation and Conservation (CWRC) situated at Panbari of Kaziranga and Dr Nabin Pandey from Corbett Foundation.

It is believed that the adult male tiger died of a fight with other tiger.

Later the carcass was cremated in the presence of top officials of the national park.