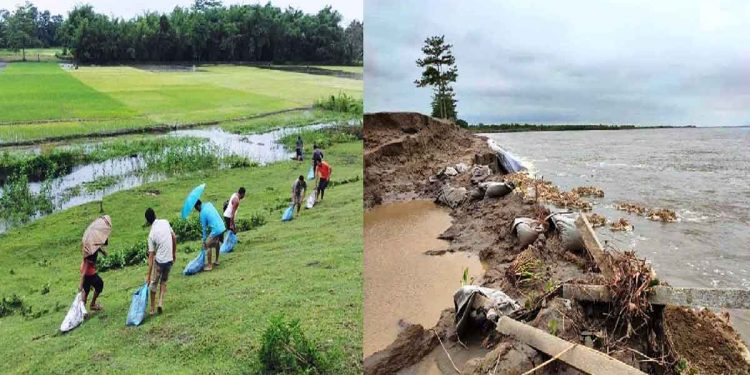 Villagers repairing a breach in the Sisi-Tekeliphuta embankment in Lakhimpur. Image: Northeast Now

Incessant rain and rise in the water level of the Brahmaputra have threatened the safety of the Sisi-Tekeliphuta embankment in Lakhimpur district, with flood situation turning grim in the last 24 hours.

The embankment, which was breached in 1998 causing a deluge of epic proportion has been repaired and strengthened with geo-bags on a stretch of 5 km from Maatmora to Kherkota at the cost of Rs. 156 crores providing the much-needed protection to the riverine people of Dhakuwakhona and Majuli.

But the rise in the water level of the Brahmaputra in the 24 hours developed cracks on the embankment, creating a panic like situation in the area.

People from nearby villages under Sisimukh and Jorkata Gaon Panchayats have come forward in doing some repair work in the portion of the embankment.

The Sisi-Tekeliphuta embankment has been in threat following the erosion of the check bund in Bali-Modarguri constructed by Dhakuwakhona Water Resources Department in early June this year.

Similarly, river water has been oozing out through underground channels of the same embankment in Bogoriguri-Charanchuk-Maatmora area where villagers also have been engaged in repair work since Saturday.

Meanwhile, continuous rain coupled with the release of dam water from 500 MW Ranganadi Hydroelectrical Power Plant (RHEP) at Yazali inside Arunachal Pradesh by North East Electrical Power Corporation (NEEPCO) on downstream Ranganadi has worsened the flood situation in the district.

The worst-affected areas in the district in the current flood are from Nowboicha Revenue Circle.

Rivers like Panchnoi, Gabhoru, Singra and Bokanadi have been in spat resulting in the inundation of thirty villages of the revenue circle including croplands.

In North Lakhimpur Revenue Circle six villages have been affected by the flood.

In Narayanpur Revenue Circle 13 villages have been affected by the flood. Overflowing waters of Pichala, Durpang and Sesa have inundated large swathes of agriculture land.

The flood by Bogeenadi and Kakoi submerged twelve villages in Kadam Revenue Circle of Lakhimpur district.

In North Lakhimpur, the Water Resources department has informed that water levels of Brahmaputra, Subansiri and Dikrong have been flowing above danger levels at various places in the district.

The latest flood has affected agriculture land of 874.5 hectares with a population of 32,647 people in the district.