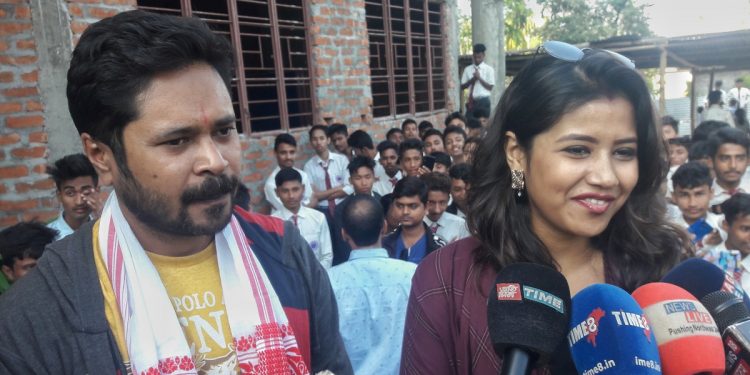 After the commercial success of several Assamese movies in recent times, another movie ‘Pratighat‘ is going to hit screens on December 6 next.

Currently the stars of the movie are promoting the movie by paying visits to schools and colleges of Assam.

As a part of the promotion the central characters of the movie, Diganta Hazarika, Amrita Gogoi and the child actress Ashramika Saikia were at National Pioneer Jr College in Tangla town of Udalguri district on Tuesday.

The actors met with students, teachers and staff of the college and other fans.

The lead actress of the movie Amrita Gogoi while exhorting the people to watch the movie said, “We are very positive that the audience will shower their love and blessings, moreover the social media is buzzing with feeds on the movie which has encouraged us.”

She also enacted few dialogues and an action scene from the movie, before the gathering drawing round of applause of everyone.

The movie sports the theme of ‘women empowerment’ with the punchline ‘Save girl child and empower them to freely live their life’.

According to Zubeen Garg, ‘it is a renaissance period for Assamese movies’.

Zubeen is pretty confident that the audience will love ‘Pratighat‘ in a same way they loved ‘Kanchenjunga’ and ‘Ratnakar’.

He also urged the people to hit the theatres and watch the movie.

Bishnu Khagaria, Amrita Gogoi, Diganta Hazarika, Padmarag Goswami, Jolly Laskar are the lead actors of the movie which is directed by Achintya Shankar.