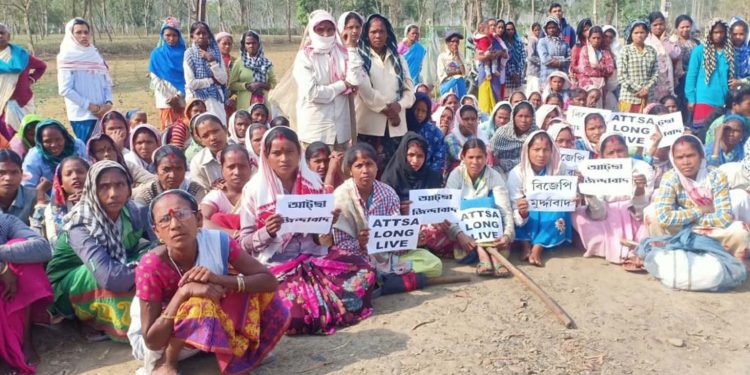 The protesters holding placards and banners raised slogans against the tea management and government for failing to provide the minimum wage.

Protest programmes were also held in many tea gardens near Dibrugarh town including Sessa tea estate and Bokpara tea estate.

The agitating workers raised slogans against the tea industry and the BJP-led government and demanded a minimum wage hike of Rs 351 per day.

ATTSA leader Lakhindra Kurmi said, “During their election campaign in 2016 the BJP promised that if it came to power, the daily wage of tea garden would be revised to at least Rs 351.”

“All it did was to increase it by Rs 30 to Rs 167 per day. Four years have passed since the BJP came to power in the state but nothing has changed,” he added.

“No political party is serious about addressing our issues. The tea tribe community has been cheated, deprived and used for political advantage by all parties. We are nothing but just vote bank for them,” Kurmi bemoaned.

On the other hand, the major tea gardens in Assam are facing grave crisis due cost of production and wage hike issues.

Assam’s tea tribe community, which constitutes around 20 per cent (70 lakh) of the state’s 3.5-crore population, has always played a decisive role in sealing electoral outcomes, both in the Lok Sabha and Assembly polls.