Two days after the ULFA(I) asked Tata Tea to relocate its administrative office to Assam, the tea major on Saturday said its main operating office is in Guwahati and the majority of its employees are from Assam.

“In response to various media reports enquiries and press reports, APPL would like to reiterate that it remains firmly committed to the state of Assam. The majority of our employees, 12,000 of whom are shareholders of our company, are from Assam,” Tata Tea, now Amalgamated Plantations Private Limited (APPL) said in a press statement on Saturday.

The company have also cleared the air and asserted that it has continued with their main operating office in Guwahati and have 21 tea estates and operating units in Assam which employees 50,000 people including seasonal workers.

“We have invested substantially in two tea processing units at Hattigor and Lattakoojan tea estates and in a spice processing centre near Misa,” the company stated. 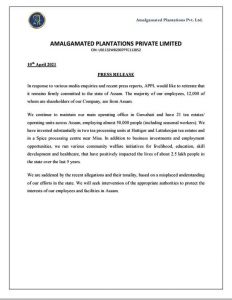 The company also said: “In addition to business investments and employment opportunities, we run various community welfare initiatives for livelihood, education, skill development and healthcare, that have positively impacted the lives of 2.5 lakhs people of Assam over the past 5 years.”

The company has sought the intervention of appropriate authorities to protect the interests of its facilities and employees in Assam.

“We are saddened by the recent allegations and the tonality, based on a misplaced understanding of our efforts in the state. We will seek intervention of the appropriate authorities to protect the interests of our employees and facilities in Assam,” the company’s statement said.

The ULFA (I) in a letter on Thursday, 2021 to Tata Tea, now Amalgamated Plantations Private Limited (APPL), to immediately relocate all its administrative offices to Assam and recruit only indigenous people in various positions in the company.

The ULFA (I) threatened the company that the failure to do so would mean that the company would not be allowed to do business in Assam.

“No one associated with your company would be allowed to travel around Assam in your business interest,” the outfit said in a statement on Thursday.

“We will not shy away to destroy your company by forcing the closure of your tea gardens either,” the outfit had said.