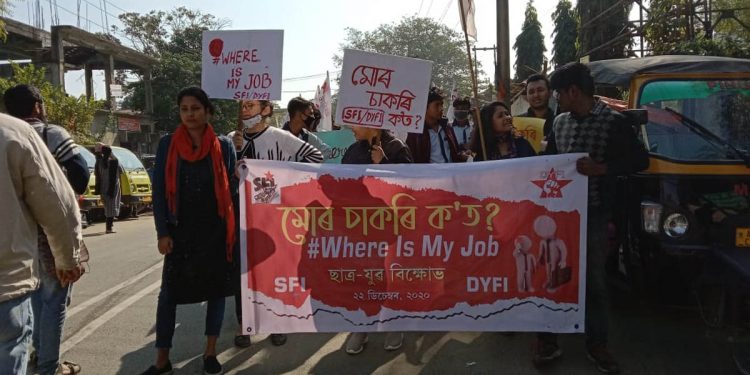 SFI and DYFI staging a protest in Jorhat on Tuesday

A large number of protestors gathered near the Bisturam Baroaah Hall in Jorhat on Tuesday to participate in the state-wide campaign titled “Where is my Job?”

They shouted slogans calling for the removal of the government from power.

The memorandum comprised of an eight-point charter of demands by the two students’ organizations.

The students’ organizations stated that prior to coming to power, BJP had promised 2 crores jobs by the central government and 5 lakhs jobs by the state government.

However, both governments have miserably failed to deliver on their promises.

As per the report published by the State Innovation and Transformation Aayog, the unemployment figures in Assam increased by 4 lakhs after the present government came to power in 2016.

There was also an increase in the level of anomalies and corruption in all government recruitment exams conducted in the state.

The kin and associates of BJP leaders were also embroiled in this corruption.

“The investigations ordered by the government to probe corrupt practices is just an eyewash,” said a member of SFI.

“Despite this, the BJP claims to win more than 100 seats in the 2021 elections. The people of Assam should give a befitting reply to it by way of ballots,” said the member.

SFI and DYFI members said that social security and employment should figure strongly in the ensuing assembly elections.

The organizations will conduct the state-wide campaign till the penultimate day of voting.

The Jorhat unit of CPI (M) lit earthen lamps near the Millenium Park here in the memory of 42 farmers, who have died in the biting cold while participating in the ongoing massive protests on the Delhi border.

Farmers from several states are protesting against three new farm laws announced by the central government.