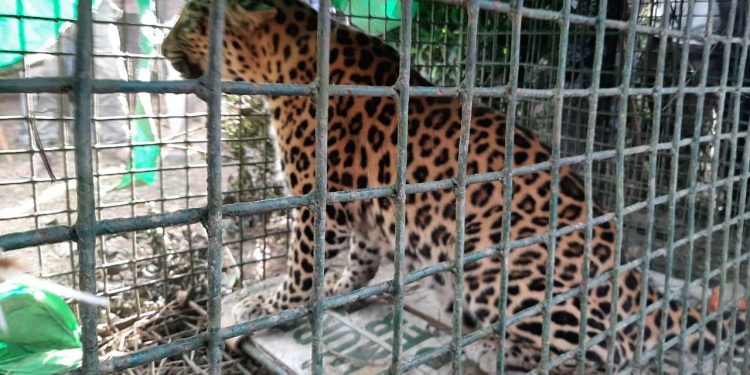 According to locals, the leopard has been creating a reign of terror in the area by eating our livestock.

“During the night the leopard used to come and took away our livestock,” said a local.

“We are very much happy that the leopard has been caged. For several years he has been creating terror and we are afraid to go out during dusk.

“We have spotted the leopard many a times in our area. But this time the leopard was trapped in a cage which was meant for him,” Rubul Sonowal, a villager, said.

“For last several years this leopard has been creating a terror in the area but we could not cage the animal after several attempts. But this time we successfully caged the animal. After examination of his health, we released the leopard at Joypore forest,” said a forest official.

Recently, four people were injured after a leopard attacked them at Sasoni in Dibrugarh’s Naharkatia.

Two of them bore serious injuries and admitted to Assam Medical College and Hospital for treatment. Later forest department caged the leopard.

Moreover, man-animal conflict has been rising rapidly due to the shrinking of forest covers and as a result the animal sneaked into human habitation in search of food.

Four leopards were caged from Dikom tea estate in last one month.