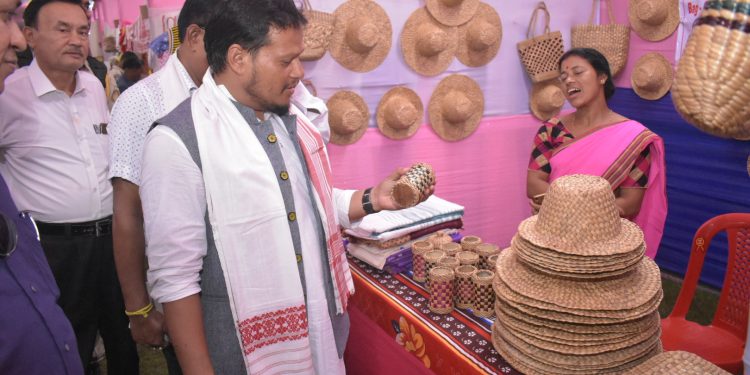 A state level five-day Industrial Expo and Trade Fair got underway in Assam’s Mangaldai from Tuesday.

The fair aimed for the market promotion of the products of the small and micro industrial units is first of its kind in Darrang district in recent times.

The fair got underway at the historic Gandhi Maidan.

The stalls of the expo which set the platform to display the products of the participating units across the State included attractive items of cane and bamboo craft, water hyacinth, traditional handloom, value added indigenous and nutritious, food, organic agri products and flowers and plants among others.

More than 50 industrial units, few of which have already acquired fame at the national level have so far taken part in the expo.

The expo is being organized by local prominent non-government organization Crystal Vision under the aegis of the District Industries and Commerce Centre (DICC), Darrang.

It was earlier ceremonially inaugurated on Tuesday by Mangaldai legislator Gurujyoti Das.

In his inaugural speech legislator Das congratulated the participants for choosing the path of entrepreneurship depending upon their creative and skillful nature and becoming the role model for other youths who used to kill their valuable time shouting in the streets and playing carom boards in the village ‘charalis‘ .

“You all deserve applause as you are choosing the innovative path of entrepreneurship without going for government jobs, not shouting in the streets and killing time in the ‘charalis‘ with the carom,” he said.

“You are the role models of the present younger generation of the State,” Das added.

He also urged upon the entrepreneurs to gather necessary knowledge of all the relevant government sponsored programmes to ensure its benefits and help their business grow.

The inaugural ceremony began with paying floral tribute and illuminating the lamp before the portrait of Dr Bhupen Hazarika in connection with the eighth death anniversary of the Bharat Ratna recipient musical maestro.