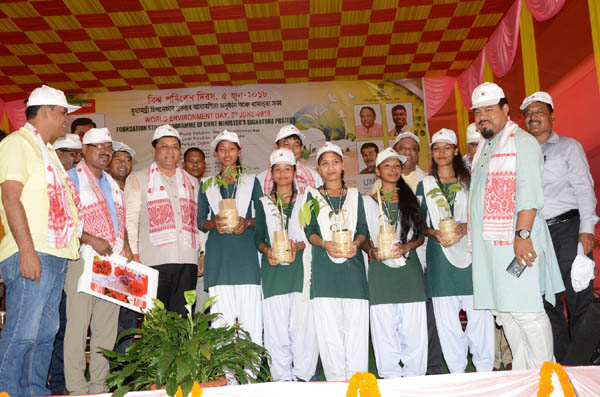 Assam also joined the rest of the world in celebrating World Environment Day as Chief Minister Sarbananda Sonowal led the state in commemorating the day at Panbari Digboi with government’s commitment to protect the environment by beating the plastic pollution.

Laying the foundation stone of Signature project in Digboi on Tuesday as part of the budget commitment of the government, Chief Minister Sonowal said that 35 per cent area of the state is covered with forests.

However, in the last several years depletion of forest cover in the state has prompted the present State government to take innovative measure like planting of saplings to increase greenery in the state.

Sonowal said that Digboi is a beautiful place which attracts a large number of tourists from across the country and outside. He also said that for the place to remain as green and beautiful as Shillong, all sections of the people of Digboi will have to work in tandem with the government.

Referring to Gurujona Srimanta Sankardeva’s reiteration, ‘Ek Brikhya Dasa Putra Sama’ (One Tree Equals Ten Sons), Sonowal said that Gurujona coined the phrase to motivate people to work for protection of environment and therefore, the society should come forward and take the responsibility to safeguard the nature. He also urged upon the parents and teachers to motivate the young minds to be benign towards the society and take responsibility to plant more saplings.

Committing the government to the protection and preservation of environment, Chief Minister Sonowal said that the State government is going forward in planting 10 crore saplings to make Assam pollution free.

Chief Minister Sonowal also planted saplings at the premises of Digboi’s Arboretum in another function.

He said, low grade single use plastics posed a grave challenge on the environment. To overcome this challenge, a collective approach is required to deal with the plastic induced pollution. He also said that since plastic is not bio-degradable; use of low grade plastics reduces soil fertility. He also stressed on creating soil awareness to beat plastic pollution.