Assam: Soil and water from Kamakhya Temple taken to Ayodhya for Ram Temple 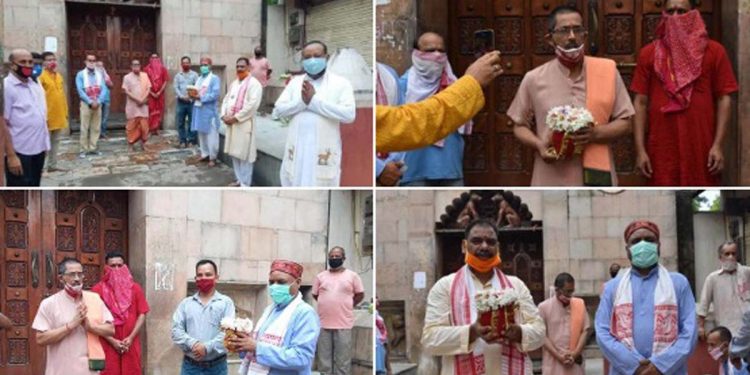 Soil and water from Kamakhya Temple will be part of the historic Ram Temple to be constructed at Ayodhya in Uttar Pradesh.

With the ‘bhumi pujan’ event is nearing, the holy soil water of Kamakhya Temple, which is one of the 51 Shakti Peethas, were collected by the VHP-Bajarang Dal North East unit on Tuesday and sent to Ayodhya.

The Doloi of Maa Kamakhya Devalaya Management Committee, Kavindra Sarma said VHP members collected soil and water from the temple to be used in the foundation laying ceremony for the proposed Ram Temple at Ayodhya.

The foundation laying ceremony to be held on August 5 will be attended by Prime Minister Narendra Modi.

Special arrangements are underway for the ‘bhumi pujan’ of the temple.

Soil and water from Meghalaya’s Jaiñtia Hills were also collected on Monday to be used in building Ram Temple at Ayodhya.

The water was collected from two rivers – Myntdu and Myntang, and soil from Syntu Ksiar, Jowai and Nartiang.

A 600-year-old Durga Temple is located at Nartiang in the West Jaiñtia Hills district of Meghalaya. This temple is one of the 51 Shakti Peethas

A section of tribals in Jaiñtia Hills of Meghalaya, who are followers of Hinduism, believe that this temple is the permanent abode of Goddess Durga.

The temple draws a large number of pilgrims from all over the country on occasion of Durga Puja.