Restriction on protests carrying ‘mashaals’ comes on the same day the AASU had organised torch-light rallies across Assam against the CAA. 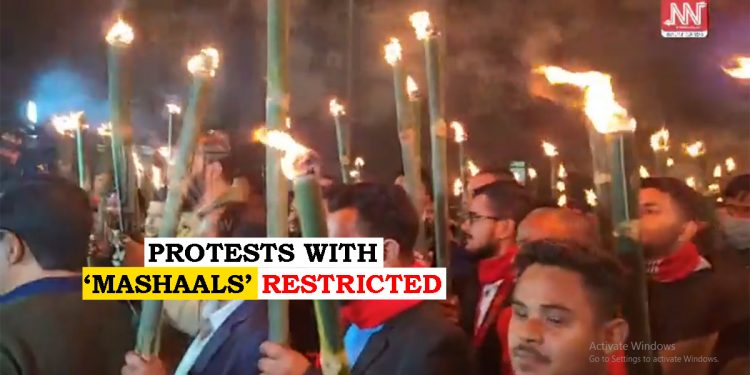 This prohibitory order has been issued by the Dhubri DC on Friday under section 144 CrPC.

The order has come into effect and will remain in force until further orders.

“I have reasons to believe that it is necessary to impose restriction on holding processions / rallies carrying lighted ‘mashaals’ as a public safety measure to prevent danger to human lives and property,” Dhubri DC Anant Lal Gyani said.

Notably, this sudden restriction on protests carrying ‘mashaals’ come on the same day the AASU had organised torch-light rallies across Assam in protest against the CAA.

The AASU’s torch-light rallies across the State were blocked by the police, with activists of the students’ body being ‘lathi-charged’ in Tezpur.

Meanwhile, the Dhubri district administration has also imposed restriction on pillion riding on two wheelers in the district.

The Dhubri DC has cited the move as a measure for “peaceful and smooth observation of ensuing Republic Day”.

“I have reasons to believe that in view of the prevailing situation relating to subversive activities of extremist outfits and for peaceful and smooth observation of ensuing Republic Day, 2021, there is a necessity to impose restriction on pillion riding on two-wheelers,” Dhubri DC Anant Lal Gyani said.