As per the direction of Assam CM Sarbananda Sonowal, the state home department has intimated disciplinary action for transfer of several police officers who took part in a night party on a river cruise over the Brahmaputra violating the lockdown and curfew norms in the city.

The department has initiated steps for transfer of one DCP, four ACPs, two OCs, two SIs and one ASI of the city police who took part in the party.

Meanwhile, Assam Chief Secretary Kumar Sanjay Krishna has written to  Commissioner of Guwahati Police  Munna Prasad Gupta on Tuesday to conduct an inquiry into the incident.

The incident relates to a number of superintendent ranking officials of Guwahati Police and their close friends reportedly attending the birthday party of a colleague at a  ferry in Guwahati on Sunday night.

Later as the photos and videos of it went viral on social media and even emerged in newspapers and news portals citizens criticized the police officials over their callousness.

The letter by the Chief Secretary read, “This reflects very poorly on the policemen and displays total disregard to orders under the Disaster Act.”

“You are therefore directed to enquire into the matter, submit a report and initiate disciplinary proceedings with intimation to the undersigned,” the letter added. 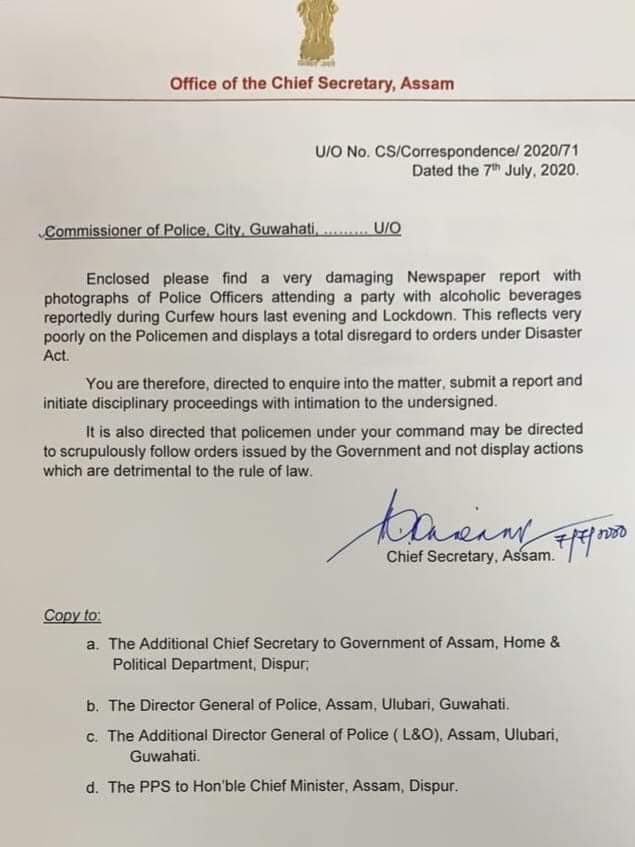