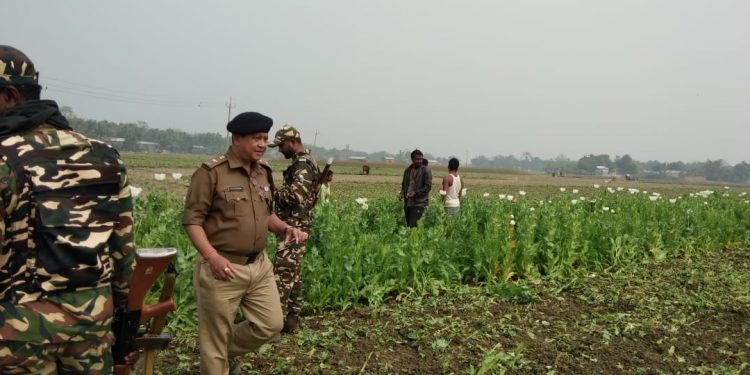 The remote sar areas or sandbars of South Salmara Mankachar  district of lower Assam are turning into a breeding ground for opium farming.

The district police within a period of ten days have destroyed the poppy grown illegally on over 100 bighas of land.

This was informed by district police sources on Monday.

These were grown at an isolated place at Char Paikarkandi village under Sukchar police station of district.

DSP Arif Ahmed told Northeast Now that the South Salmara Mankachar police have been keeping strong vigil on the development and has  started keeping a close watch on poppy farming.

“We destroyed the poppy plants where ever it surfaced, but we failed to identify farmers as villagers refused to disclose any information on the matter,” said Ahmed.

Md Abdul Hi Seikh, a local villager said few months back, some people from West Bengal and Bihar have taken the land from local villagers on lease by bluffing the villagers they will do medicinal plant cultivation.

“But, today, when the police team arrived here and said this is opium plantation and cultivation of which is illegal. Only after that, we have come to know about such kind of cultivation,” said Seikh.

On condition of anonymity, a school teacher of the district said earlier the local people, particularly residing in border villages, were engaged in illegal trade of smuggling like cattle and drugs.

But the new trends of cultivation of poppy in the region due to the absence of security personnel in remote riverine and sar areas is definitely a matter of grave concern for both local residents and law enforcement agencies as well, the school teacher added.

Police sources said the people who had been farming fled the scene before the team had arrived.

However, police have started their further investigation into the matter and a manhunt to arrest the culprits has already been initiated.