Assam: New dawn for agri sector as professionals take to farming in Golaghat 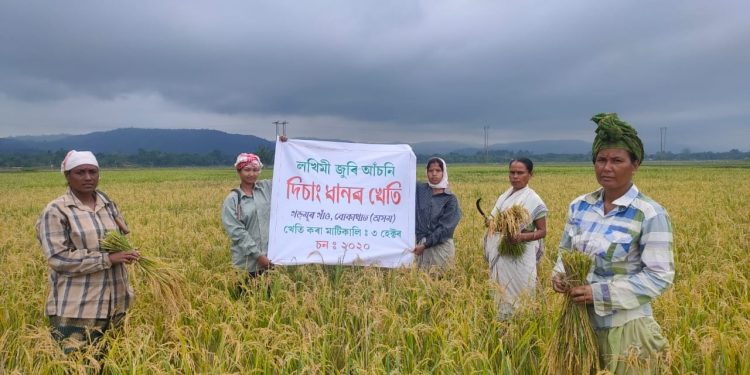 A streak of sunlight appears to have broken through the dark clouds hovering over Assam’s agricultural landscape.

At Garmur village near Bokakhat in Golaghat district three youths, professionals in different fields, have recently picked up the plough to furrow a path anew on the fields which they had left fallow a decade or so

The trio like thousands of other youths in Assam, disillusioned by the ‘backbreaking and unrewarding’ occupation of agriculture, deviated towards white collar jobs.

Among the three, Bikash Boruah’s disenchantment was even greater.

At a young age he had witnessed his father pass away, the family unable to pay his steep medical bills, despite him having been a farmer who had been awarded by the State.

Bikash Boruah then in higher secondary, acquired a job at the nearby Numaligarh Refinery Limited as did his two friends Phalgun Chetia, at present assistant professor in CNB College and Chandan Boraik, assistant engineer in Assam Power Distribution Company Limited, Bokakhat.

“What inspired us to return to our roots was the dairy farm in the neighbourhood owned by Bikash Bharali, who we looked upon as an elder brother. Bharali da who had studied agriculture and animal husbandry in the UK,  used cutting edge technology to milk the profits in his dairy, ”   Boruah said.

The three, two in their early thirties and one in his late twenties decided to give it a go in order to uplift the village in which they resided and in turn inspire others to return to the fold.

Dr Thakuria’s guidance to the three centred round how to scientifically access the waters of the Lakhimi juri, a stream which watered the fields.

“Under the  AICRP project I sowed two hectares of land with Disang rice seed, a short duration high yielding pre- and post flood variety. They transplanted it in March and harvested in June. Fertilizers, pesticides were also given for the two hectares,” he said.

Dr Thakuria, who has founded several technologies on water management showed them that standing water all the time in a rice bed was not needed.

“As the Lakhimi juri, a stream that flows down the Karbi hills waters their fields throughout the year dried up due to scant rainfall this year, I showed them that they need not use the pumps frequently in order to keep standing water in the fields all the time as is the traditional practise, thus saving on water, time, energy and money. The new technology of alternately wetting and drying allows the roots to take in more oxygen and ultimately gives a better yield,” Dr Thakuria said.

He further said he had supplied seed for another one hectare for planting and that an engineer designing and costructing permanent distributors for efficient water utilization of the entire area by the Lakhimi juri area was the need of the hour for multiple cropping.

Boruah said they had sown Disang over about three hectares, more adjoining land of other villagers being brought under cultivation and the villagers themselves helping out in sowing, harvesting, weeding, etc.

But all was not hunky dory as the trio soon found out.

COVID-19 and the resultant shortage of labour was not the only roadblock that they faced.

What was lacking was skilled manpower in the fields and storage for the grain they harvested.

Boruah said out of the 40 to 45 quintal of paddy they had harvested they kept about 20 quintals for seed purpose and gave away the rest to the farmers who had pitched in with labour.

“With the monsoons upon us there was no dry space big enough to store the 20 quintals of paddy,” he said.

They at last had to take rooms in the local school building now empty of students due to the COVID-19 pandemic.

Boruah said agriculture as an occupation could never be profit making unless done in a scientific manner.

“The message we want to give to the state Agriculture department is that they train up skilled manpower across the stat. The training should be given to groups of youths with equipment like tractors, harvesting equipment,  fertilizers, spraying, planting of saplings,  all equipped with the latest technology. These youths should provide agricultural services to farmers,” Boruah said.

The deterrents have, however, not stopped them and they have forged ahead this kharif (monsoon) season with the high yielding Ranjit and Aijong variety of paddy.