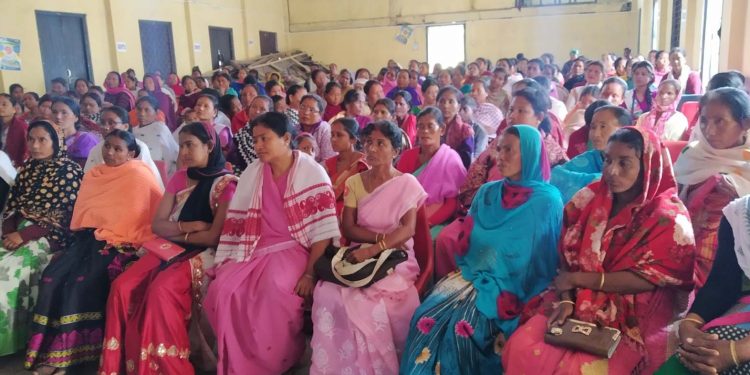 The midday meal workers of Assam’s Udalguri district have vowed to intensify their movement in support of their various demands.

The Udalguri chapter of the All Assam Primary and Upper Primary Midday Meal Cook and Helpers’ Association under the banner of Centre of Indian Trade Unions (CITU) held a meeting on Sunday at Bordoloi Bhawan in Tangla town of Udalguri district.

More than 400 midday meal workers from Khoirabari, Mazbat and Udalguri town gathered at the meeting.

During the meeting, the midday meal workers resolved to remain united and maintain the spirit of the movement by intensifying protests if the education department of Assam doesn’t secure their jobs and hike their honorarium.

Addressing the gathering, the secretary of the Udalguri chapter of CITU, Nurul Amin said, “The state government must reconsider their decision to hand over the midday meal service to the NGOs and withdraw it as the NGOs don’t have any knowledge about the food habits and culture of Assam.”

“So, relieving them from the service will be inhuman and injustice,” said Amin.

Regarding education minister Siddhartha Bhattachajya’s assurance that there is no threat to the midday meal workers’ jobs, All Assam Primary and Upper Primary Mid-day Meal Cook & Helpers’ Association secretary Chitra Rajbongshi said, “The fate of 1.19 lakh midday workers is uncertain.”

“We cannot work for a meagre remuneration of Rs 1,000 per month. It needs to be hiked to minimum of Rs 6,000 to keep it at par with daily wage earners and the lip service of the education minister is not enough. He must assure us in black and white,” added Rajbongshi.

“All the cooks and helpers have vowed to get united in a common platform by maintaining the spirit of the movement and intensify the protest if the Assam education minister doesn’t address our demands,” said Hanufa Begum, a midday meal worker.

According to Inspector of Schools, Udalguri, Bhaben Deuri, there are around 40,000 students in 556 schools of Udalguri district which have been covered under centralised kitchen.

As per sources, the NGO, which has been assigned to provide midday meal in the district, has been constantly failing to cover all the listed schools daily since it was handed over the service.