The fire broke out at Tinkunia area near Polo ground in Assam’s Dibrugarh town on Tuesday evening. 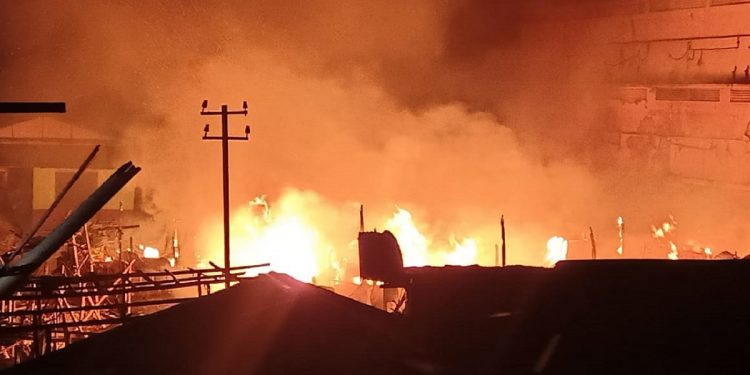 At least 30 houses were gutted in massive fire that broke out in the heart of Dibrugarh town of Assam.

The fire broke out at Tinkunia area near Polo ground in Assam’s Dibrugarh town on Tuesday evening.

It is suspected that the fire broke out due to a short circuit. Most of the houses, which were destroyed were made of bamboo.

The fire was so massive that it engulfed the entire area.

Dibrugarh SP Shwetank Mishra said, “The fire broke out suspectedly due to short circuit. As many as six cylinders blast took place, which further aggravated the situation. No casualty and no injury has been reported in the incident.”

“Five to six fire tenders were used to douse the fire. The quantum of damage is yet to be assessed. We will start an investigation from tomorrow morning,” Dibrugarh SP Shwetank Mishra added.

Sources said that property worth lakhs of rupees were damaged in the fire.

“We heard a loud sound after which we saw a massive fire in our locality. People came out of their houses running. Fire tenders came and doused the fire which saved many other houses,” a local resident said.