Assam: Man-elephant conflicts on the rise in Dibrugarh 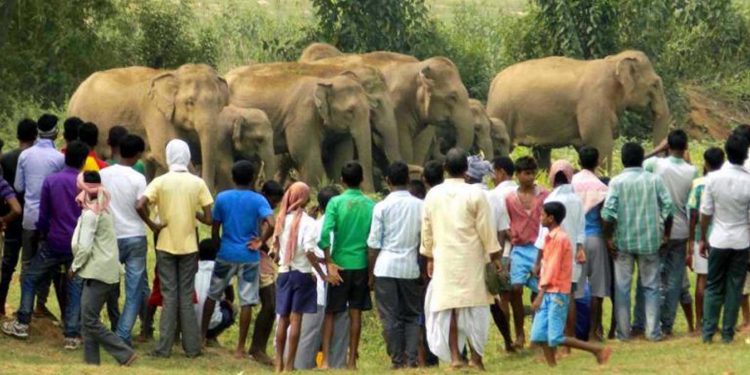 Man-elephant conflicts have been rising tremendously in Assam because of the shrinking of forest covers.

Wild elephants often enter human habitation in search of food and in many cases the jumbos damaged the crops.

On several occasions, it has been witnessed that people challenge the rampaging elephants with bow and arrows in order to drive them back.

On different occasions, elephants have also trampled several persons to death and it has become pertinent to resolve these conflicts.

The Assam Forest Department data shows that a total of 245 persons and 146 elephants were killed between 2001 and 2014 in several incidents of man-elephant conflicts on Assam-Bhutan border.

According to the Forest Survey of India, Assam lost 65 per cent of its low and semi-evergreen forests since 1972.

On November 1, 2019, two wild female elephants were found dead in a paddy field at Sessa Nagaon village in Madhupur area in Dibrugarh district.

According to reports, the carcasses of the elephants were found by some villagers in early morning hours.

The pachyderms were found dead at a distance of about 100 metres from each other.

Since neither of the dead jumbos bore any injury marks it is suspected that they might have died of electrocution.

In the last five years, many elephants were found dead at Madhupur area of Dibrugarh.

The forest department also failed many FIR’s but so far no one has been arrested.

Forest officials and a team of veterinary doctors rushed to the site after being informed by locals about the incident.

Vital body parts were taken from the dead elephants for autopsy.

It is suspected that the wild elephants may have come in touch with live wires that are laid by farmers around their paddy fields to stop the elephants from rampaging the crops.

The dead elephants belonged to a wild herd of around 35-40 pachyderms from the nearby Dehing-Medela reserve forest which has been causing havoc in the area by raiding paddy fields and granaries.