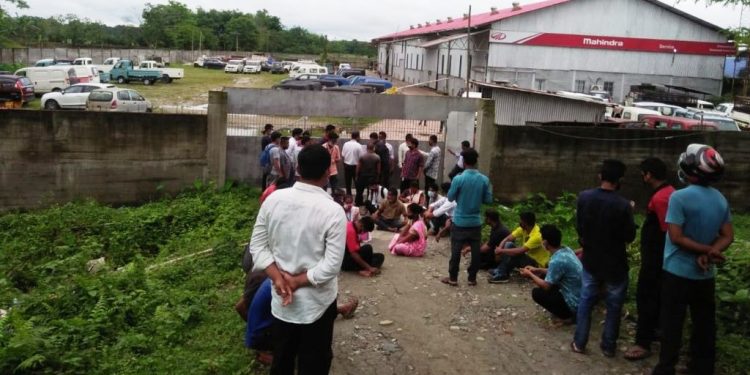 As over 12.2 crore people in India lost their jobs due to imposition of nationwide COVID-19 lockdown from March 24, its aftershocks have been felt in Assam’s Lakhimpur district too.

In the district, around 80 employees in a private sector lost their jobs.

The affected employees belong to Biswanath Ashok Auto Motors at Nowboicha in Lakhimpur.

According to Center for Monitoring Indian Economy (CMIE), which has conducted the study on this job loss also said it will be difficult for salaried workers to find a job in the near future when they return for work after the lockdown.

Echoing the prediction by CMIE, the employees of the automobile agency in Lakhimpur is now facing the heat.

The automobile agency pushed 80 of its 144 employees out from its service centre premise at Lothow, Nowboicha on NH-15 last weekend and locked the entrance gate.

These employees were paid only 20 per cent of their monthly salaries by the automobile agency and were told 60 per cent deduction of the same from the month of May.

The employees in Biswanath Ashok Auto Motors have been in tenterhooks with the management since Thursday over issues related to pay cut.

As the management of the automobile agency announced the payment of 40 per cent of the salary for the month of May, the employees protested.

Since then they were observing non-cooperation as a protest for the pay cut.

The president of Lakhimpur District Automobile Labour Union Manoj Gogoi also participated in the protest by the employees.

“We’ve been sweating for the profit of the agency for years, but in excuse of lockdown they’re squeezing our salaries”, complained one employee who were outside the locked premise.

When the nationwide lockdown began in late March, India’s Ministry of Labour and Employment asked private and public organizations not to terminate jobs on the pretext of prevailing conditions.

But these pleas hardly made any difference and large-scale retrenchments have taken place as businesses have been hit hard due to the on-going crisis.

The same is the story in the case of Biswanath Ashok Auto Motors viz a viz to its employees in Lakhimpur district.

The labour inspector for Lakhimpur Prasanna Tayung district visited the agitating employees of the Biswanath Ashok Auto Motors at Nowboicha and assured to mitigate their demands on Thursday.

But as the employees returned for work on Friday they were pushed out from the premise by the agency.

It may be mentioned that Prime Minister Narendra Modi announced a 21-day nationwide lockdown March 24, giving the nation less than four hours notice before it took effect.

Since then, it has been extended twice and has left millions of workers jobless and in dire straits.

Lakhimpur is a zero industry district in Assam where employment opportunities are very limited.